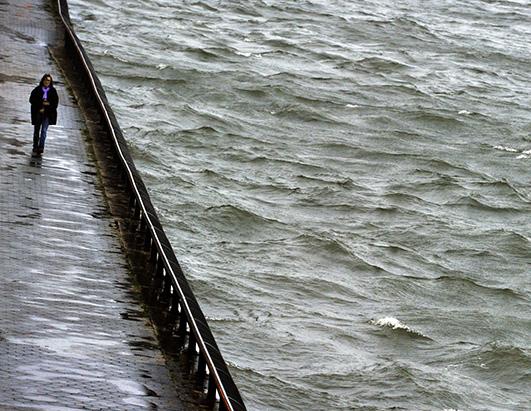 The declaration came after the massive storm battered the east coast of the United States, flooding lower Manhattan and leaving a half million people in New York City without power.

Sandy swept a wall of churning sea water and driving rain onto a vast swathe of the coastline, flooding the heart of New York and leaving at least 13 dead and millions without power.

The huge storm stretched over hundreds of miles and paralyzed several major cities as it brought coastal flooding and hurricane-force winds to the densely-populated East Coast and blizzards to the mountainous interior.

Seawater coursed between the iconic skyscrapers of New York’s financial district in lower Manhattan, flooding subways and road tunnels and shorting out the power grid, plunging more than six million households into darkness.

The catastrophe completely overshadowed the US election race, forcing a halt to campaigning a week before Americans are due to go to the polls to choose between President Barack Obama and challenger Mitt Romney.

Hurricane Sandy had killed 67 people as it tore through the Caribbean, and reports of more deaths began to arrive after it made landfall at 8:00 pm (0000 GMT) in New Jersey and began to wreak havoc in the United States.

Authorities warned the threat to life and property was “unprecedented” and ordered hundreds of thousands of residents in areas from New England to North Carolina to evacuate their homes and seek shelter.

The National Hurricane Center said wind speeds inside Sandy dropped as the storm became a post-tropical cyclone, but remained hurricane-force at 75 miles per hour (120 kmph) after it made landfall near casino resort Atlantic City.

Falling trees tore down power cables, plunging what weather experts said were millions of homes into darkness, while storm warnings cut rail links and marooned tens of thousands of travelers at airports across the region.

A nuclear power plant in New Jersey declared an alert as waters rose.

The Oyster Creek nuclear power plant, just north of Atlantic City, was already on a scheduled outage as Sandy made landfall, and the industry regulator said there was no immediate danger.

The hurricane sent a record storm surge of 13.7 feet (4.15 meters) into lower Manhattan, flooding seven major subway tunnels used by hundreds of thousands of daily commuters and swamping cars in the financial district.

“The New York City subway system is 108 years old, but it has never faced a disaster as devastating as what we experienced last night,” city transport director Joseph Lhota said early Tuesday.

Hours earlier, a power sub-station exploded in a burst of light captured by amateur photographers as a massive blackout left much of Manhattan, and some 500,000 homes across New York City, in darkness.

The flood waters had begun to recede early Tuesday, but the Con Edison power company said it could take a week to completely restore power.

Disaster estimating firm Eqecat forecast that Sandy would affect more than 60 million Americans, a fifth of the population, and cause up to $20 billion (15 billion euros) in damage.

Refineries closed and major arteries such New York’s Holland Tunnel were shut to traffic. The operator of two major New Jersey nuclear plants said they might have to be closed, threatening half the state’s power supply.

The New York Stock Exchange, the Nasdaq and the futures markets in Chicago were closed for Monday and Tuesday, along with federal government offices and the entire Amtrak rail network on the eastern seaboard.

Obama urged Americans to heed local evacuation orders as he stepped off the campaign trail and spent the day in the White House helping to coordinate the response to the disaster.

“The election will take care of itself next week,” Obama said. “Right now, our number one priority is to make sure that we are saving lives… and that we respond as quickly as possible to get the economy back on track.”

Both the Democratic incumbent and his Republican rival Romney were keen to display resolute leadership in the face of the storm, given the memory of Hurricane Katrina in 2005. Romney also canceled some appearances.

Former president George W. Bush was widely seen as having bungled the handling of Katrina, which devastated New Orleans. The failure of authorities in the ensuing emergency response tainted the rest of his presidency.