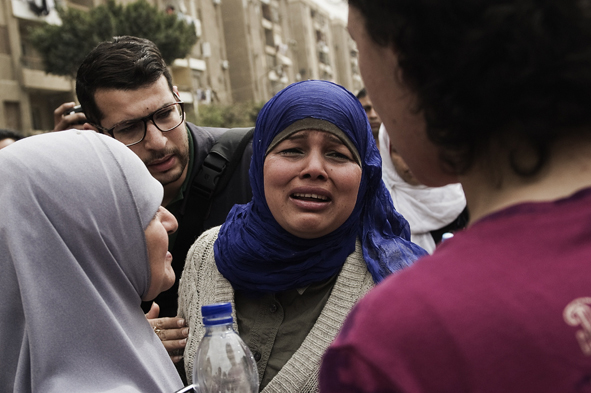 Samira Ibrahim, a young revolutionary who sued the military for imposing virginity tests on detainees, is leading a movement to bring the jurisdiction of the International Criminal Court (ICC) to Egypt. The “popular movement to pressure the Egyptian government” is holding a rally this Friday in Tahrir Square.

The ICC was created to supersede state-level courts that cannot try criminals who are powerful enough to gain influence over the judiciary itself. In the eyes of Ibrahim, the ICC could serve not only as a watchdog of the powerful, but also as a protector of the populace.

“If we are to be truly democratic,” said Ibrahim, Egypt needs the ICC, “because the treaty would protect the people.”

The treaty she refers to is the Rome Statute, which established the court in 1998 in order to try “the most serious crimes of concern to the international community.” The Rome Statute defines these as genocide, systematic attacks against civilians, war crimes, and crimes of aggression.

These are some of the very charges Ibrahim and many of her fellow Egyptians would be eager to see leveled against Hosni Mubarak and his former cohort.

“As long as we claim we are a democratic country, as long as we say we respect the rule of law, we have to ratify the treaty so we can try those criminal living among us,” said Ibrahim.

Former regime officials are not the only perpetrators that Ibrahim wants to see brought to justice though.

“There are massacres that happen in Egypt all the time. The revolution revealed some to the international community, however, some still happen with no attention, particularly in the suburbs and the county.”

She gives as examples the Al-Qoddeseen Church bombing that killed 21 Christians, the Cabinet clashes featuring police shooting and mass arrests, the attacks on a victims’ family sit-in at Mohamed Mahmoud Street, the Maspero Massacre where the military ran over Coptic protesters and the 1998 murders and cover-ups by security forces in the village of Kosheh.

Ibrahim used these incidents to point out abuses before and after the revolution, by a variety of powerful groups, that often exploiting vulnerable people such as minorities and unarmed protesters.

Ibrahim shares the view that has been expressed by Egyptian lawyers, activists, and political parties that, “the judiciary in Egypt is politicised. They go with whoever is in power. So we don’t have one that can give us our rights.”

In an attempt to reclaim those rights, Ibrahim has been working over the past eight months on a campaign to bring the ICC to Egypt. She has been canvassing to explain the concept to as many people as possible and says she has been gathering support for the cause.

Ibrahim initially gained renown for suing the military over the ‘virginity tests’ it imposed on detainees. The case resulted in a ban on the practice. Though the impunity of the military in this instance is one of the reasons she wants ICC oversight, she says the fight is about more than a single issue, instead saying that justice in Egypt is all one package.

“We, as Egyptian people, have lost all trust in our officials.”

Djibouti, Tunisia, and Comoros are the only countries in the Arab League to also have membership in the court.

Samira Ibrahim was named one of the “world’s 100 most influential people” by Time magazine in 2012.