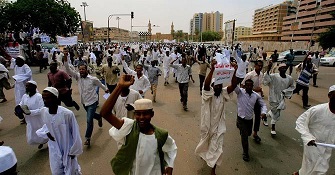 A million-man march, calling for the implementation of Shari’a law through the constitution, has been postponed until 9 November.

The march, called for by the Gama’a Islamia’s political wing, the Building and Development Party (BDP), alongside other Islamist parties and movements, was scheduled to take place on 2 November under the name “Shari’a Friday.”

“The postponement is due to the fact that a large portion of Islamist leaders are currently performing pilgrimage in Mecca,” Safwat Abdel Ghany, head of the BDP’s political office, said at a press conference. Abdel Ghany added need preparation was needed to ensure high participation. “Yet, this doesn’t mean that other events related to the protest and in preparation for it will not be held before 9 November.”

Mahmoud Sha’ban Ibrahim, Al-Azhar university professor was met with applause when he said he would march on 2 November in preparation for “Shari’a Friday.”

The group of Islamist parties and movements also announced the establishment of a Coalition for Defending Shari’a (CDS), which shall monitor the Constituent Assembly, the body tasked with drafting the constitution, for violations of Shari’a.

“The Freedom and Justice party (FJP) and the Muslim Brotherhood, hope all political groups reach agreement over the draft constitution,” Azab Mustafa, an FJP member, said. He added they won’t give up on implementing Shari’a.

“The Quran is our constitution and jihad is our way,” Mustafa said, adding the Brotherhood has been waiting 80 years for religious constitutional reform.

The attending movements called for a constitution with Shari’a as the only source of legislation.

“The secularists want to alter the Egyptian identity by marketing international conventions as the replacement for Shari’a,” Khaled Al-Sherif, Islamic researcher, said, adding it is inappropriate for the constitution to be removed from the people’s true identity. “Who amongst us approves of homosexuality? Who approves of allowing women to divorce men or of giving them an equal share of inheritance as to that of men?”

Ibrahim claimed Shari’a is now being (unofficially) called for in Europe and the United States, while Egyptian secularists are fighting it.

“All those present are in agreement that should Shari’a not be referred to as the main and only source of legislation, we will hold million-man marches to express the peoples’ aspirations,” Abdel Ghany said, adding they won’t “allow the secularist minority to impose its control over the majority of the nation.”

“Shari’a cannot be put up to referendum,” Ahmed Ismail from the Salafi Fadila party said, “I suggest that the clause involving Shari’a be excluded from the referendum to be held on the constitution.”

Official spokesperson for the Copts 38 Coalition, Nader Al-Sirafy, agreed with the “Shari’a Friday’s” demands. Copts 38 Coalition is a Coptic coalition calling for less strict rules in regards to divorce and remarriage among Copts.

“We refuse Article 3 of the draft constitution and demand to be dealt with according to Shari’a,” Al-Sirafy said.

Article 3 states, “for Egyptian Christians and Jews, the principles of their religious laws are the main source of legislation in personal and religious matters as well as in the selection of their spiritual leaders.”

“This article differentiates between our legal treatment and the treatment of Muslims, through banning us from the right to being treated according to Shari’a,” Al-Sirafy said, “thus it turns us to second-class citizens.”

Al-Sirafy stressed that there’s no need for Article 3 since Shari’a preserves Copts’ right to equality with Muslims.

The statement released during the press conference was signed by the BDP, the FJP, Al-Asala Salafi party, the Peace and Development party, the Mediocracy Forum, the Labour party, the Salafi Front, and Al-Nour Salafi party.

In a joint statement released on Tuesday, Al-Nour party and the Salafi Calling denounced the draft constitution, released for discussion three weeks ago, claiming the drafting committee changed around articles after they had been agreed upon. They blamed “secularists” for the changes.