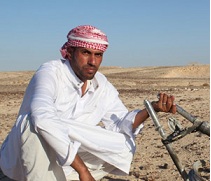 Prime Minister Hisham Qandil will allow the people of Sinai to own the lands they have been living on for years.

The announcement came in a meeting of Major General Shawky Rashwan, head of Sinai Development Authority, along with a number of ministers to discuss encouraging investments and development in Sinai.

“The acquisition will be for Egyptian citizens… in case of joint investments with foreigners they will be given the land usufruct” Shawky told state agency MENA.

He added they discussed allocating 80 thousand acres for agriculture and land reclamation. A percentage of these lands would be auctioned to the people of Sinai.

Sinai residents who want to buy land must produce certificates proving they and their parents are Egyptian, from the Ministry of Interior and Civil Registry Office.

Sheikh Ali Fraig, the head of the Arab Party for Justice and Equality in Sinai, said land ownership has been a demand of people in Sinai for many years, “in the era of former Prime Minister Ahmed Nazif there were only usufruct ownerships, nobody would want to invest of they only had the right to use the land but couldn’t own it.”

Reactions to the decision suggest fears that buyers would be financed by or sell the lands to Israelis or Palestinians.

“The patriotism of the people of Sinai is unquestionable, ever since 1948 when many Palestinians fled to Sinai, not one of them was able to own an inch of Sinai because Egyptians wouldn’t sell it… such talk aims only at distorting our image,” Fraig said.

He added that the only people who sold lands to Israelis were the officials of the former regime, who are now being prosecuted for selling lands in Sharm El-Sheikh.

Fraig also criticised the auction, saying the poor would lose their lands and houses to richer bidders, “this would only fuel hatred among the people of Sinai.”

He suggested the lands should be divided among Sinai residents and youth from different governorates, giving priority to the Bedouins. If any land is to be sold, the civil registration employees should make sure that both the buyer and the seller are Egyptian.