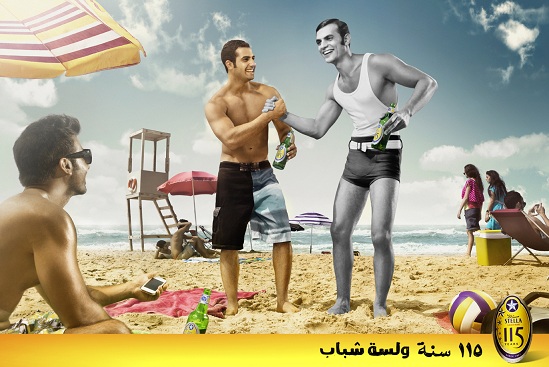 Since the current president has been elected, opinion makers left right and centre have been issuing warnings that we are collectively in for a change, and a backward one at that. But are we?

Take a look at this cheerful image of a couple of dudes in board shorts and sunglasses on a beach. The bare-chested main character is having a manly hand-clutching moment with a monochrome dude from yesteryear, both holding a green glass bottle, while another bicep touting youngster looks on smiling.

Equality is important, so in the background we find two women, who are obviously dressed for a day on the beach, with their lower legs and arms exposed.

The ad celebrates that Egypt has been home to Stella beer for 115 years and is still going strong. Yes friends, it is an ad for alcohol. Alcohol that has been produced, bottled and drunk in Egypt for over a century. And judging from the campaign they intend to stay around. Lissa shabab!