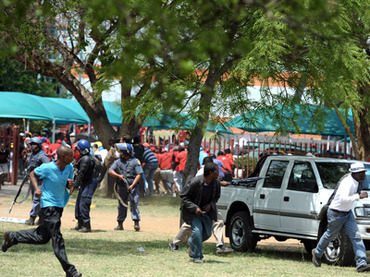 Johannesburg (AFP) – Police in South Africa on Tuesday fired rubber bullets, teargas and stun grenades in clashes with Anglo American Platinum miners, as a deadline passed for 12,000 sacked workers to reclaim their jobs.

At least 1,000 miners defied an ultimatum to return to work by 7 am clashing with police and blocking roads amid accusations that they set fire to a power sub-station at the mine in northwestern Rustenburg.

Police said the workers had blocked fire engines from the sub-station, thought to have been set alight in a pre-dawn attack.

Thousands of Amplats workers who were sacked early this month for going on an illegal strike were given an option of returning to work on Tuesday morning if they wanted their jobs back.

The deal was brokered in negotiations last week by the main National Union of Mineworkers (NUM) in talks with Amplats.

But the workers refused to go back to work until their pay demands are met.

“We are six weeks on strike, we can’t go back to work empty handed,” workers representative Siphamandla Makhanya told AFP, confirming clashes between workers and police. “There is a lot of shooting and things like that today.”

Police told AFP the Amplats power substation was set ablaze around 2 am and “approximately a thousand or so strong people tried to barricade the police and fire brigade from getting there.”

“Since then we have been having clashes with this group of people,” which is trying to block roads and hurling rocks at the police in and around the informal settlement of Nkaneng, where many workers live.

Amplats, the world’s number one platinum producer, had agreed to rehire the workers after six weeks of strikes that have shuttered its mines.

The global miner gave the workers until Tuesday to return on existing wage agreements but with a 2,000 rand ($230) one-off allowance if they did so.

But some striking workers were adamant they would not be persuaded to return to the underground until there’s some form of pay rise.

“Workers are very interested in going back to work as long as management is prepared to put something on the table,” said Makhanya indicating the miners were softening their stance from the 16,000 rand per month their initially demanded.

Amplats promised to give the numbers of workers who showed up later in the day.

A wildcat strike in August at Lonmin platinum mine has had a domino effect engulfing nearly the entire mining industry in South Africa as work stoppages spread to other platinum mines and gold sector as well.

The unrest has cost 10.1 billion rand ($1.2 billion) in lost production this year, pushing the country’s yearly growth forecast downward to 2.5 per cent.

The industry contributes up to nearly one fifth of GDP when related activities are included.