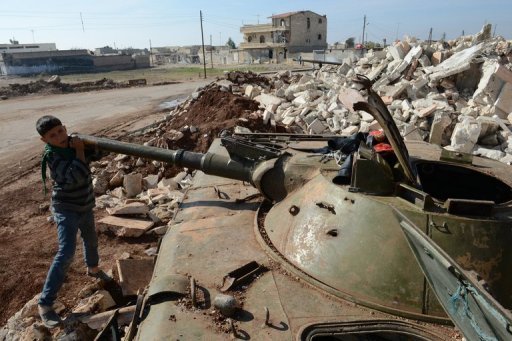 Damascus (AFP) – Clashes erupted between Syrian rebels and troops backed by Palestinian fighters near Damascus Tuesday as the UN-Arab League peace envoy was due in China in a bid to revive struggling efforts to halt the violence.

On the first day after the Eid Al-Adha Muslim holiday, which saw a bid for a ceasefire collapse amid renewed clashes, car bombings and air strikes, a watchdog said more than 500 people had died in fighting over its four days.

The failure of peace efforts prompted fierce condemnation from Qatar, with Prime Minister Sheikh Hamad bin Jassem Al-Thani saying the international community was becoming complicit in a “war of extermination.”

Tuesday’s clashes near Damascus spread into the Yarmuk Palestinian camp, home to 148,500 people, after breaking out in a neighbouring district, activists and a watchdog said.

There were no immediate reports of casualties, but the Syrian Revolution General Council, a network of activists on the ground, said fighting was heavy between the rebel Free Syrian Army and Palestinian forces.

Rami Abdel Rahman, the director of the Syrian Observatory for Human Rights, said the pro-regime Popular Front for the Liberation of Palestine-General Command had joined forces with the army after fighting spread into the camp.

There are more than 510,000 Palestinian refugees living in Syria and their leadership is largely supportive of President Bashar Al-Assad’s regime.

Elsewhere in Syria on Tuesday, the military renewed shelling attacks on the northern city and province of Aleppo, the central city of Homs, the southern province of Daraa and the northwestern province of Idlib, the Observatory said.

Regime warplanes also carried out air strikes on the Idlib town of Maaret Al-Numan, where fighting has raged since the rebels overran the town on October 9 cutting off a key army supply route along the Aleppo-Damascus highway.

The UN-Arab League envoy, Algerian diplomat Lakhdar Brahimi, was due in China after on Monday visiting Moscow, where he said the situation in Syria “is bad and getting worse.”

Diplomats say Brahimi is to go to the UN Security Council in November with new proposals following his visits to Russia and China — which have repeatedly vetoed resolutions threatening action against Assad’s regime.

Sheikh Hamad, the Qatari prime minister, expressed deep frustration with the failure of international efforts in an interview with Al-Jazeera television.

What is happening in Syria is not a civil war but a war of extermination against “the Syrian people,” he said.
The war, he charged, was being waged “with a licence to kill, endorsed firstly by the Syrian government and secondly by the international community.”

Qatar has been among the strongest backers of Syria’s rebels and has been widely accused of providing them with arms.
Moscow on Monday called for international dialogue with Assad’s regime, but the call was rejected by key regional player Turkey.

“There is no point in engaging in dialogue with a regime that continues to carry out such a massacre against its own people, even during Eid Al-Adha,” Turkish Foreign Minister Ahmet Davutoglu said on Tuesday.

Monday saw the regime launch its heaviest air strikes to date, the Observatory said, with more than 60 raids across the country.

Two car bombs were also reported to have gone off in and around Damascus, as continued clashes shook areas around the capital and other major cities.

The Observatory said 124 people were killed on Monday, including 56 civilians.

The Britain-based group relies on a countrywide network of activists, lawyers and medics in civilian and military hospitals, and says its tolls take into account civilian, military and rebel casualties.

The uprising, which began in March 2011 as a peaceful movement, has steadily militarised after being met with brutal state repression and has left more than 35,000 people dead, according to rights groups.

Most rebels, like the population, are Sunni Muslims in a country dominated by a minority regime of Alawites, an offshoot of Shi’a Islam.