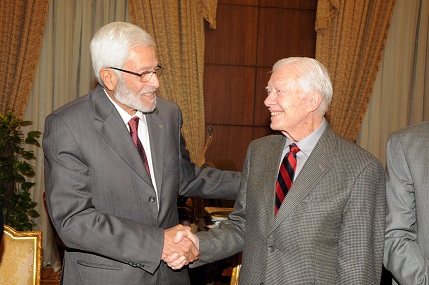 Former US president Jimmy Carter made a special visit to the Constituent Assembly’s headquarters in the Shura Council on Tuesday, where he met with the assembly head Hossam El-Gheriany.

Secretary General of the Constituent Assembly Amr Derag and head of the system of governance committee Gamal Gebril also attended the 40-minute-long meeting.

During the meeting, Carter urged that the drafting of constitution be speedily completed, saying that he had met with a number of ambassadors in Cairo who all assured him that a finalised constitution would be the cornerstone for Egypt’s development, as well as attracting new investments and tourism, reported Turkish Anadolu news agency citing Gebril.

During a press conference held following the meeting, Derag told the media that he, El-Gheriany and Gebril reassured Carter that the drafting of the constitution would be finalised within three weeks, or a month at maximum, adding that some unresolved issues within the current draft would be determined within a few days.

Carter shared his concerns at the meeting about articles within the draft constitution that are intended to guarantee citizens rights and freedoms, enquiring about whether there is discrimination against women and Copts.

“There are clear provisions in the draft constitution which guarantee that no Egyptian shall be discriminated against based on their religion, ethnicity or colour,” Gebril quoted the reply Carter receieved.

Derag added that he fact that the rights and freedoms committee is headed by a prominent Copt, Edward Ghaleb, is the biggest proof that no religious discrimination is taking place.

The former US president also asked about international conventions, wondering whether the constitution ensures that they are binding, and Derag explained that any convention has legal power according to Egyptian legislation.

As the US president who mediated the Camp David accords in the late 1970s, Carter enquired about what the new constitution might hold for them. Carter was told that the constitution is not the place for such an accord, and that Egypt is committed to its treaties and no government would “dare” to breach those treaties.

President Mohamed Morsy met with Carter last week as part of a World Elders Organisation, where Carter discussed the Israeli-Palestinian conflict. Following the meeting, Carter stated that he felt that Morsy cared about the conflict more than former president Hosni Mubarak, according to Al-Ahram.

Carter is the head of the Carter Center, founded to oversee the effectiveness of election processes in chaotic contexts. The centre observed Egypt’s 2012 presidential elections which brought Morsy to power, where they reported on the electoral process.