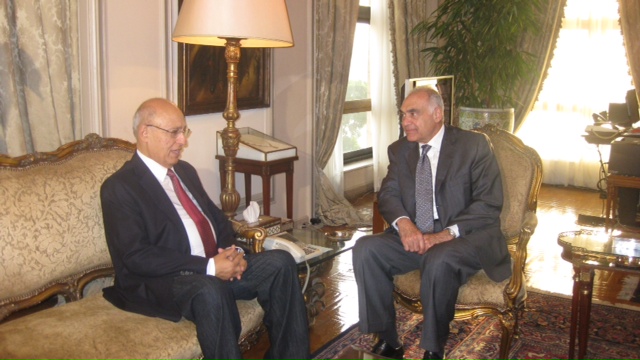 Minister of Foreign Affairs Mohammed Amr held two meetings on Tuesday with Palestinian representatives. The meetings discussed the issue of Palestinian unity and efforts for Palestine to become a full member of the United Nations (UN).

Amr met with Nabil Shaath, the delegate for international relations for the Fatah Party, and Azzam Al-Ahmed, the delegate responsible for the National Movement for Palestinian unity.

Palestine has been a non-member entity observer at the UN since 1974. Its status was upgraded in 1998 which allowed Palestinian representatives to participate in general debate amongst other rights. In 2011, President Mahmoud Abbas applied for Palestine to gain full member status, but the application is yet to be voted on by the Security Council.

The split between the two main Palestinian factions, Hamas and Fatah, occurred in 2006 after Hamas won the legislative elections. This resulted in a split of the Palestinian Authority in to two parts; the Fatah-run Palestinian National Authority in the West Bank and the Hamas government in Gaza.

Presidential spokesperson Yasser Ali also confirmed that Egypt is sending aid to the Gaza strip and intends to keep sending aid in the future.