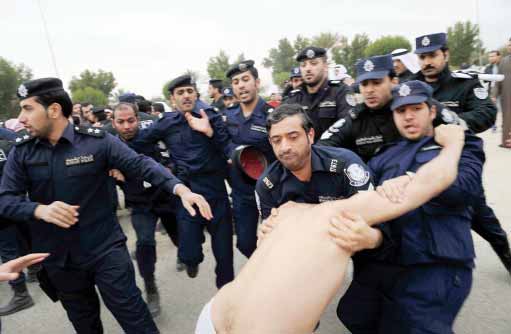 An Egyptian citizen was beaten and tortured by police in Kuwait, said Kuwait Human Rights News (KHRN). The organisation reported that on the night of 25 October, Kuwaiti police detained an Egyptian man after a traffic accident and detained him at the Abu Halifa police station, where he was subjected to violence and humiliation.

The man’s vehicle collided with a car driven by an officer of the Kuwaiti Interior Ministry. Both individuals were tended to by emergency medical personnel, and the officer reportedly told them to not take the Egyptian to hospital. The medical workers then determined that the man did not require further medical care. Police arrived and after inspecting the scene of the accident, told the Egyptian to go to the local police station where he was asked if he had been driving while under the influence of alcohol, which he denied.

According to the statement issued by the human rights organisation, the man was then transferred to the Abu Halifa police station where he was beaten on the head, back, and shoulders by officers in civilian clothing while they verbally abused him.

The report says the man was forced to admit he was guilty before the police would stop beating him.

KHRN confirmed that the Egyptian expatriate plans on filing complaints to human rights groups calling to for an investigation of the incident, and said that medical and eyewitness reports support his claims.

Egypt’s Foreign Ministry denied having any knowledge of the incident.

Kuwaiti police dispersed protesters this month with tear gas, injuring dozens according to activists. The police also arrested some of the protesting activists who had voiced their disapproval of the country’s amendment of a current election law.

A medical source told Reuters that 29 people had been admitted to the hospital for tear gas inhalation and baton bruises.

Egyptian Najla Wafa was arrested in September 2009 in Saudi Arabia for a business dispute with a member of the royal family and was sentenced to 500 lashes and five years in prison.

Human rights groups have condemned what they call a cruel punishment, but Wafa remains in custody in Saudi Arabia and has served out the penalty of most of her lashes.