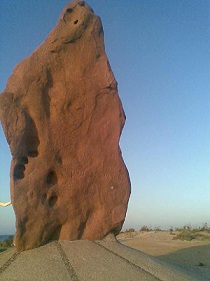 Mohamed Hendi, president of the Freedom Movement of Sinai, has filed a lawsuit against President Mohamed Morsy and Prime Minister Hisham Qandil in order to remove Dayan’s Rock in Sheikh Zuwaid.

Hendi said he gave power of attorney to Consellor Mahmoud Saeed Lofti, chairman of the Commission on Human Rights Bar Association in northern Sinai. Hendi instructed Lofti to raise the issue with the head of state to, “press for a decision to remove the Israeli rock of shame from the town of Sheikh Zuwaid in the North Sinai governorate and cleanse the province of all existing Israeli symbols.”

Dayan’s Rock is a 10 metre high granite Israeli memorial. The Israeli artist, Mordechai Kifri, carved names and epitaphs, on both sides of the stone, of Israelis who had died. The rock is named after Israeli military leader and politician, Moshe Dayan.

The Israelis transported the rock from the foothills of Mount Sinai, in the south of the peninsula, during the Israeli occupation. They placed it on the Mediterranean coast in Sheikh Zuwaid. On its first face they drew a picture of a Bedouin woman carrying her child and running towards the sea, to suggest that Arabs were fearful of Israelis. On the second face they drew an upside down map of the Sinai, to signify their ownership, and on the third they drew a map of Israel. It became a memorial to 11 Israeli pilots killed in 1967.