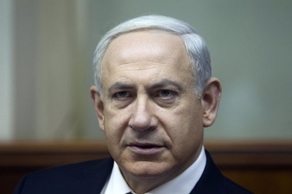 Netanyahu was on a two-day visit to France, a permanent member of the UN Security Council and one of the six world powers leading nuclear talks with Iran.

Netanyahu hopes during the two-day trip “to build a good working relationship with the French leader,” a source close to the Israeli leader told AFP.

Since taking office five months ago, Hollande has only spoken to Netanyahu by telephone but met Palestinian president Mahmud Abbas twice – both times in Paris.

Netanyahu enjoyed close ties with Hollande’s predecessor Nicolas Sarkozy until the latter reportedly called him a “liar” in November last year during a private conversation with US President Barack Obama.

Their talks were expected to focus on the international standoff over Iran’s nuclear programme, Israeli officials said.

Netanyahu has warned that a nuclear Iran would pose an existential threat to the Jewish state and has repeatedly refused to rule out military action, fuelling speculation that an attack was imminent.

“France is a very important country in the Western alliance which is dealing with the Iranian bomb,” a senior Israeli official told AFP on condition of anonymity.

“Netanyahu clearly wants to talk about the Iranian issue with Francois Hollande especially after his speech at the UN at the end of September,” he said.

In his address to the UN General Assembly, he wielded a bomb diagram on which he drew a red line to underline his pleas to Washington to set firm limits on how far Tehran can go with its nuclear programme before encountering a pre-emptive military strike.

With the rumour mill working overtime, Hollande spoke by phone with Netanyahu in mid-September, urging him to seek a peaceful, diplomatic solution to the Iran standoff.

Two weeks later, in his UN address, Netanyahu appeared to pull back from the brink, pushing back the deadline until spring or even summer 2013, ostensibly to allow time for international sanctions to work.

Iran denies Israeli and Western suspicions that its nuclear programme is a front for a drive for a weapons capability.

Netanyahu is due to have a working lunch with Hollande on Wednesday and then meet Prime Minister Jean-Marc Ayrault and Foreign Minister Laurent Fabius.

Peace talks with the Palestinians have been on ice for more than two years, but a source close to Netanyahu confirmed the two men would also touch on ways to revive it.

“The only real bone of contention between Netanyahu and Hollande is the absence of negotiations with the Palestinians and Israel’s continued settlement” policy, said Denis Charbit, professor of political science at Israel’s Open University.

But he said the issue of peace talks was not likely to play a central role in their talks as a result of the relative calm on the ground.

On Thursday, Netanyahu is to travel to Toulouse with Hollande to attend a memorial ceremony for three children and a French-Israeli teacher at a Jewish school who were shot dead by an Islamist gunman who also killed soldiers of North African origin.

Demonstrations against the visit are planned in several French cities.