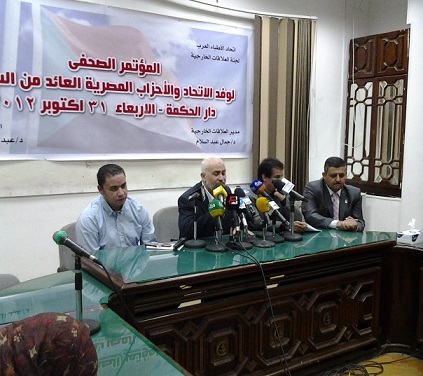 A member of the Egyptian delegation that visited the site of a bombed factory in Sudan has described the results of the air strike as “catastrophic.”

Several figures of the Egyptian popular delegation coming from Sudan held a press conference on Wednesday to describe the situation in the Al-Yarmouk factory, said to be attacked by the Israeli military.

The delegation was formed of 10 leading figures from the Arab Doctors Union, alongside several syndicates and political parties.

The Sudanese government claims four Israeli aircraft struck the weapons factory in Khartoum, which produces light weapons for local use. Israel, while refusing to comment on whether it was responsible for the bombing, claimed the factory was being used by Iranian agents to produce and send weapons to Hezbollah and Hamas.

Gamal Abdel Salam, assistant secretary general of Arab Doctors Union and leader of the delegation, said they were denied access to Al-Yarmouk factory during the first day of their visit but were allowed to visit on the second day.

Describing the results of the air strike as “catastrophic,” he said the factory’s weapons manufacturing zone was reduced to ashes.

Mohamed Soliman, the secretary of information at Al-Karama party and member of the Popular Current, said that four died and 60 more suffered from smoke inhalation during the bombing. He added that windows of buildings in the surrounding area were blown out.

Mohamed Saad Elbanna, the secretary general of the syndicate of applied arts designers, said the strike is an attack on the sovereignty of the whole Arab region, not just Sudan.

When asked about the route taken by the aircrafts to reach Khartoum, Hany Hodeeb, secretary of the Egyptian Socialist Democratic Party in Al-Fayoum, said the Sudanese Information Minister Ahmed Belal Othman told them he has no information about this issue yet.

“Those actors who helped Israel deliver the strike should be exposed as they are criminals,” said Soliman.

The information minister was the only Sudanese official to meet the delegation during their visit, according to Gamal Abdel Salam.

Hodeeb said everything the incident should be documented before a lawsuit is filed against Israel at the International Criminal Court (ICC). However both Israel and Sudan have avowed their intention not to ratify the treaty that established the jurisdiction of the ICC.

Elbanna called on all states to support Sudan in this incident. He also criticised the syndicates and parties that didn’t join the delegation supporting Sudan.

Gamal Abdel Salam challenged Israeli claims that Al-Yarmouk factory produces heavy and chemical weapons, saying that if such claims were true, the citizens living in the area surrounding the factory would have died.

Furthermore, Abdel Salam said he doesn’t believe the strike was in preparatory test for a war against Iran. However he predicted other attacks could take place elsewhere, saying this would enhance the incumbent Israeli Prime Minister Benjamin Netanyahu in upcoming parliamentary elections in Israel.

Abdel Salam asserted that an attack on Sudan is unacceptable for Egypt, as Sudan lies within “Egyptian national security boundaries.”

“The response of the Arab League and the Arab foreign ministers was very disappointing, however we ask them to support Sudan financially and diplomatically,” concluded Abdel Salam.