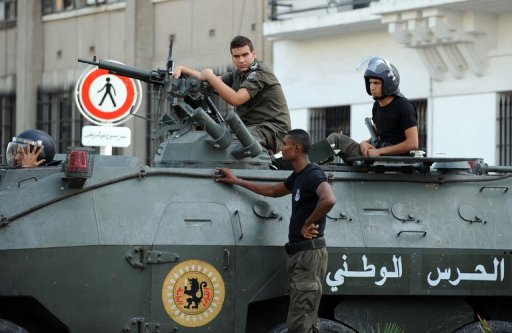 Tunis (AFP) – Police and soldiers deployed heavily on Wednesday in the Tunisian capital after deadly clashes with radical Islamists during the night, the Interior Ministry said.

“There has been a reinforcement of security, of the national guard, of the army to prevent any retaliation” by the radical Salafist movement, ministry spokesperson Khaled Tarrouche said.

The security forces would use “all the tools allowed by law” in the event of any further violence, he warned, suggesting that they could fire live rounds if confronted.

Militants attacked two national guard posts in the Tunis suburb of Manouba on Tuesday night after police arrested a Salafist suspected of assaulting the head of the area’s public security brigade, according to the ministry.

The attacks were carried out by “a large number of people with radical religious tendencies,” Tarrouche said earlier.

“The response by the security forces led to the death of an attacker who was hit by a bullet,” he said.

A police official told AFP another person died in the violence, but that was denied by Tarrouche.

Since the Tunisian revolution in January last year that ousted former President Zine El Abidine Ben Ali, radical Islamists have carried out a number of attacks, including against security forces and on cultural events.

The opposition accuses the government, led by Islamist party Ennahda, of failing to rein in violence by Salafists, a hardline branch of Sunni Islam.

But the authorities have vowed to crack down on Islamist violence in the wake of a Salafist-led attack on the US embassy in September in which four assailants were killed.