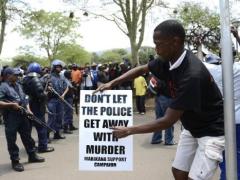 Johannesburg (AFP) — Close to 2,000 striking mine workers rallied at an Anglo American Platinum mine in South Africa on Wednesday, continuing to defy an ultimatum to go back to work as 13 of their number were arrested after clashes with police.

The striking miners were gathering at two of the top platinum producer’s shafts in Rustenburg, north west of Johannesburg, according to police spokesperson, Sam Tselanyane.

“At Khuseleka shaft of Anglo American Platinum [Amplats] there are plus or minus 1,500 at the sports ground,” Tselanyane told AFP. “And also at the Khomanani shaft… there’s plus or minus 300.”

With widespread mining unrest in its third month in the continent’s largest economy, work stoppages have tapered off at most mines except Amplats.

The firm had given a deadline of early Tuesday for 12,000 sacked workers to reclaim their jobs, but there was no firm word on how many had returned to the mines.

Strike leaders said they had ignored the ultimatum.