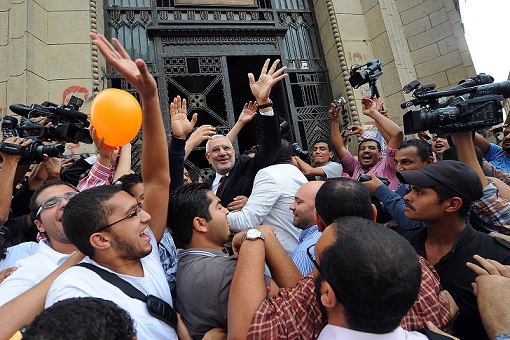 Strong Egypt is a new kind of political party, and on Wednesday it sought to make its presence official. Registration approval is expected from the Supreme Court’s party affairs committee, in the next seven to 10 days.

It was a festive atmosphere on 26 July street, with crowds of young people dancing and releasing orange and white balloons – the colours of the new party.

Strong Egypt does not intend to play politics as usual. In fact they do not even have party secretaries yet. They envision a party run from the bottom up, which more truly represents its constituents.

Ibrahim Rabie, representative of Strong Egypt in Osim, Giza, said, “normally there is a hierarchal structure, but in our party there are no leaders appointed. We do not want to impose leaders on the public; we want the people themselves to chose the party’s leaders and officials.”

Instead of a group of founders assigning themselves positions in the party, Strong Egypt has a preparatory committee. This is an amorphous organisation with no positions assigned. It brought the party into being, and now intends to hand it over to the people.

Abul Fotouh is currently caretaker party president, but elections this Friday will create a party governing body. All 8,500 Egyptians registered with Strong Egypt will vote representatives in their governorate to a supreme committee. This committee will manage of the party and hold a general conference, where a president will be elected.

The purpose of the party is clear: to achieve the goals of the revolution. Said Rabie, “there should be…comprehensive laws established very soon in order to achieve these goals.”

Ahmed Samir, from Strong Egypt’s media committee, said the government must work harder to find evidence against those who killed protesters and abused power before and after the revolution. Otherwise, the perpetrators will continue to get off the hook.

“In countries that have successfully transitioned to democracy, legal regimes were put in place to guarantee transitional justice. We need to adopt this,” said Samir.

He added, “judicial authorities and Al-Azhar need to be strictly independent. This is something that everyone, all parties and groups, are asking for.”

The members of the Preparatory Committee also agree on a methodology. Rabie said, “our policy is not based on opposing others, rather it is based on being cooperative.”

This is important for a party whose poster-boy, Abul Fotouh, was criticised during the presidential campaigns for passing up an opportunity to cooperate with Nasserist candidate, Hamdeen Sabahy.

“Abul Fatouh did not refuse cooperation,” said Rabie, “the general atmosphere was perverted at the time. Cooperation was disrupted by those who would benefit from keeping them apart.” He stopped short of saying who this invisible hand may have belonged to.

Abul Fotouh is also called a closet-Islamist, based on his decades-long involvement in the Muslim Brotherhood, even serving on its guidance bureau.

“We are not an Islamist group,” Samir clarified. “Egyptian society is committed to Islam. But if a party describes itself as Islamic, this gives space to perceive that there are people against Islam, which will raise unnecessary conflict. There is no need for that, so people should not define themselves as Islamic or not Islamic.”

Samir said Strong Egypt agrees with the second article of the constitution, “Islam is the state religion, its official language Arabic, and the principles of Islamic Shari’a, are the main source of legislation.”

Strong Egypt chose a sun as its symbol, with neat orange rays splaying from the centre. At the end of some rays are symbols of Egyptian society, such as a flag, a wrench, and the scales of justice. It has been laughed at for being overly chaotic, but perhaps this is appropriate for a more democratic, decentralised party.