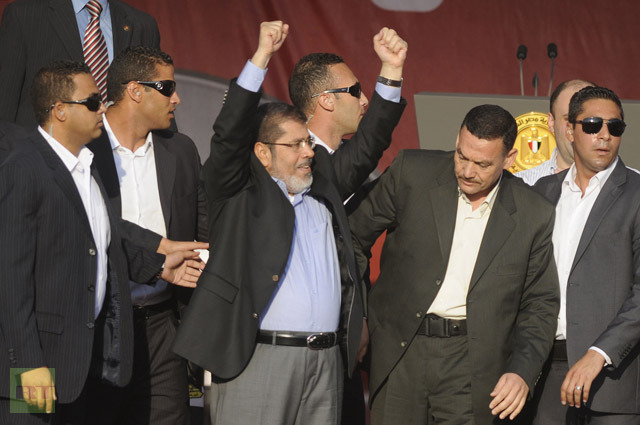 Most Egyptians are disappointed with the course of the country’s democratic transition, according to the conclusion reached at the latest New Arab Debates forum. Of the attendees at Wednesday’s (English) and Thursday’s (Arabic) free speech forum, just over 56 per cent expressed disappointment with Egypt’s democratic beginnings, despite the election of Egypt’s first civilian president.

One of the speakers at the forum, Mohammed Salmawy, is the president of the Egyptian Writers’ Union. He said the current government has been using the same laws former President Hosni Mubarak relied upon to maintain control. He further criticised the current government of reneging on election promises, by actions such as appointing pro-Islamist governors and placing government sympathisers at the helm of some of Egypt’s largest newspapers.

“They have no roadmap for democracy and the status of women and Copts is much worse than before,” Salmawy said reflecting on the ever-increasing secular strife in Egypt and the debate surrounding women within the constitution. However he did say he saw the fall of the old regime and more specifically of a repressive dictatorship, as a permanent change in Egypt. “People would never allow the country back to that.”

Salmawy also criticised the formation of the constitution, saying that it should have been created well before any parliamentary or presidential elections.

Khaled Fahmy, a history professor from the American University in Cairo, countered Salmawy argument. He acknowledged there were serious problems in Egypt, such as the treatment of detainees by the police, but believed the country is off to a good start. “Reforming the security apparatus remains one of the toughest nuts to crack,” Fahmy said referring to the 270 documented cases of alleged police brutality since President Mohamed Morsy came to office.

Fahmy stressed that he believed Egypt’s democracy will continue to thrive as time passes. “We will not have change in one day and night,” he said, pointing at the responsibility of the citizens themselves to help improve the nation.

Despite the disappointment surrounding Egypt’s transitional government, audience polling revealed upwards of 13 per cent of the audience shifted their view to recognise some grounds for optimism in Egypt’s infant democracy.

The New Arab Debates began last year as a response to the Arab Spring and the political turmoil that followed in Egypt and Tunisia specifically. Led by Tim Sebastian, the award-winning journalist and founder of the Doha Debates, the debates focus on providing a platform for rigorous political discussion on controversial issues.

The Cairo debate was hosted by Mai El-Sherbini, the Egyptian television presenter and news anchor.