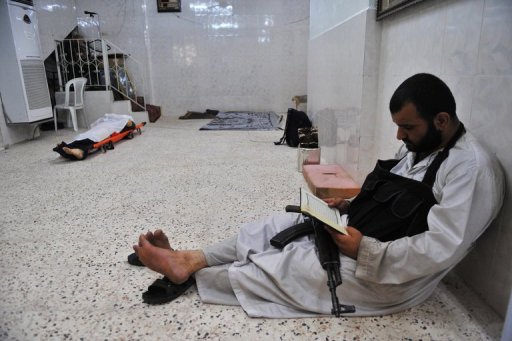 By Sarah Benhaida (AFP) – The West has raised fears Syria’s revolution is falling into the hands of Islamic extremists, but many rebels, and even some peaceful activists, say they are willing to tolerate jihadist fighters for lack of a better option.

US Secretary of State Hillary Clinton raised the spectre of extremism on Wednesday, warning that Islamist radicals were trying to “hijack the Syrian revolution” and urging the opposition to reject them.

But on the ground, rebel fighters and commanders say they have no problem fighting alongside such groups as the Al-Nusra Front, a jihadist force that has taken part in key battles and waged a campaign of bombings.

“We fight together on the front,” said the head of the main rebel Free Syrian Army (FSA) in the embattled northern city of Aleppo, Abdel Jabbar al-Okaidi, adding that Islamist-inspired fighters were often at the forefront of battles. “They have a deeper love for martyrdom than the other fighters,” he told AFP by telephone.

Adnan, a rebel fighter in Aleppo, added: “They want to be martyrs, we let them stand in the front line.”

Analysts said rebel commanders are not hesitating to take advantage of the fervour and discipline displayed by the Islamists, including many foreign fighters who rebel leaders say they will force out after the conflict.

“FSA leaders recognise the high quality of their equipment, and their members’ professionalism,” said Francois Burgat, head of the Beirut-based French Institute of the Middle East. “This inspires and encourages new recruits.”

Some democratic opposition activists also rejected Western criticism of the jihadists’ presence, saying they are bridging a gap that foreign powers are not willing to fill.

“Clinton is the reason why such groups have even emerged,” said an activist from the central city of Hama who identified himself as Abu Ghazi.

“If the international community had done anything at all to help, we wouldn’t be where we are today. This is a reflection of the profound stupidity and hypocrisy of US policy,” he said, enraged by her most recent comments.

Abu Ghazi said that though he disagreeed with the “culture and thinking” of the Islamists, he had no choice but to accept their presence. “They came to help the Syrians fight the regime when no one else heard our calls.”

Some activists worry, however, that the presence of the Islamists is helping President Bashar al-Assad’s regime in its efforts to portray Syria’s revolution as an Al-Qaeda-inspired insurrection.

Since protesters first started taking to the streets of Syrian towns and cities in spring 2011, the regime has claimed to be fighting “armed terrorist groups” and radical Islamist fighters.

“The presence of jihadists in Syria now only legitimises the regime’s discourse,” one activist told AFP on condition of anonymity.

“In some videos, they praise Mullah Omar and Osama bin Laden, calling for the killing of Alawites,” Assad’s minority community, the activist said.

Some observers have accused the Syrian intelligence services of creating the Al-Nusra Front so that its attacks can give the regime the justification it needs to carry out its brutal repression.

“Today, however, there is a credible hypothesis that the puppet created by the regime has broken away from its old master,” said Burgat.

And for some activists, the jihadists are far from the greatest threat to the principles of the revolt.