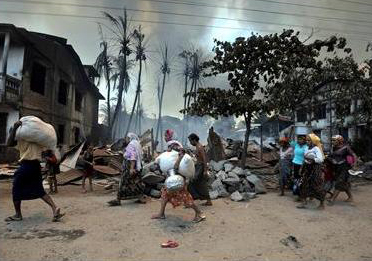 The World Bank Group (WBG) approved on Thursday its first development scheme to aid Myanmar, also known as Burma, in over 25 years. The new Interim Strategy for Myanmar was endorsed by the WBG’s board of directors in a bid to improve the lives of those living there. WBG approved $165 million to be loaned without interest to the impoverished nation.

The project will be in effect for the next 18 months, and will focus on “accelerating poverty reduction by helping reform institutions to deliver better services to people during this critical transition period,” a statement released by WBG read.

The WBG president, Jim Yong Kim, expressed his commitment to helping Myanmar “move ahead as part of a united global community to deliver solutions to address people’s most urgent development needs.” According to Yong Kim, the areas in most need of development are health, education and infrastructure, as well as the creation of new private sector jobs.

“Analytical work, including financial accountability assessment, a public expenditure review and an investment climate assessment are underway to underpin these efforts,” the statement continued.

Pamela Cox, the WBG East-Asia and Pacific regional vice-president, admitted that transition in Myanmar will take time, “but we are committed to working with all our partners to ensure that poor people start to feel the benefits of reforms quickly, especially through better services from the government.”

On top of the Interim Strategy, an $80 million pre-debt clearance grant was also approved to provide temporary relief in 15 townships with poverty as the main selection criteria. The grant will be distributed to the townships, which will elect their own representative councils to oversee expenditure by identifying priority needs. According to the statement, the councils will “prepare development plans, design projects, contract materials and labour, and transparently manage and report the use of project funds.” Together with the Japanese government and the Asian Development Bank, WBG hopes to clear enough of Myanmar’s debt by early 2013 in order to grant Myanmar access to full-country programs. Japan pledged it would forgive $3.8 billion of debt

According to WBG statistics, roughly a third of the nation lives below the poverty line. Over the past several decades military dictatorships have brutally oppressed Myanmar’s citizens and mismanaged its economy, transforming what was once known as the rice bowl of Asia into an agricultural disaster.

Derek Tonkin, the chairman of Network Myanmar and former British ambassador to Thailand and Vietnam, argued that maintaining sanction in Myanmar would be a step in the wrong direction. He argues that reactive policies towards Myanmar have in the past had horrible consequences for its people, without really weakening the dictatorship. Tonkin said that a pro-active approach would help lift the country out its current state in preparation for a larger regional role.

“Next year there are the South-East Asia games, which will be important to the country,” Tonkin said. “In 2014 they will assume the chair of the Association of South East Asian Nations.” Within the next few years, Myanmar should also be joining the ASEAN economic community. Tonkin argues that these three events are major markers within a short time-span that is within their own interests to achieve.

To benefit from these events, Myanmar’s human rights record has to improve. Tonking argues that the situation is improving and the plight of the Rakhine Muslims, also known as the Rohingya Muslims, will improve. Sadly, he argues, the reality on the ground is very different from the reality in the media and “it is only when you arrive in Myanmar do you realise that the atmosphere has changed completely over the past year, but it hasn’t filtered through the media as of yet.”