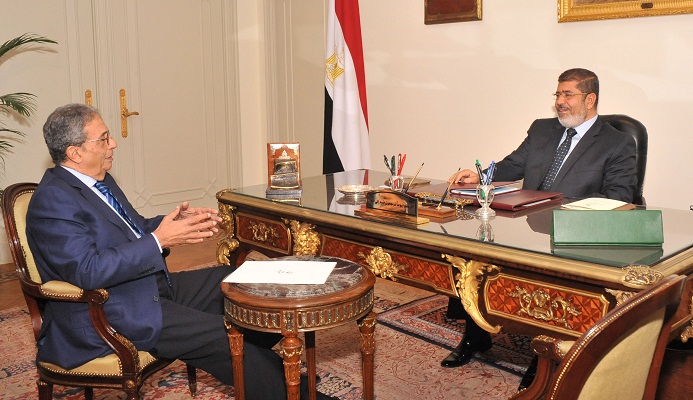 President Mohamed Morsy held separate talks on Saturday with three high-profile former presidential candidates at the presidential palace in Heliopolis. The one hour meetings focused largely on the drafting of the constitution, while internal issues such as politics and the economy were secondary priorities.

Morsy met with Amr Moussa, leader of the Conference Party and foreign minister for a decade under Mubarak. According to Ahmed Kamel, Moussa’s spokesperson, the meeting focused on Egypt’s internal political and economic issues and, more importantly, the drafting of the constitution. “Time,” Kamel said quoting Moussa, “is not the most significant factor for drafting the constitution.” He argues that what is more important is the opinion of the public and whether they accept the final draft.

Moussa had told Morsy that it would be dangerous to focus on the final voting process surrounding the constitution given the current composition of the Constitution Assembly. He also stressed it was important for there to be no pressure on the constitutional committee in order for them to be able to work unimpeded.

“These meetings are an attempt to bring closer the different points of view, rather than to apply pressure on or intervene in the Constituent Assembly,” Kamel said. Moussa stressed that the public must be given the time to voice their opinion on the final draft of the constitution before the Constitution Assembly reconvenes.

Morsy also met with Abdel Moneim Abul Fotouh, a former Muslim Brotherhood member and founder of the Strong Egypt Party. Aboul Fotouh reiterated in his meeting the need to finalise the constitution within the allotted time-frame. There was also talk of combating corruption.

Morsy held talks with Hamdeen Sabahi, the Nasserist founder of the Dignity Party and former independent presidential candidate. During their brief meeting, Sabahi expressed his desire to see the Constitutional Assembly restructured in a balanced way so that it may be more representative of all Egyptian people.

Sabahi advised Morsy to stick to the social justice demands that came from the revolution. He said the president should ensure there is a minimum and maximum wage system, progressive social taxation and the immediate cessation of the suppression of union strikes and other social movements. He also advised the president should revisit the farmers’ plight to aid those “still suffering from poverty, marginalisation and neglect,” according to a statement by Sabahi.

Sabahi was also critical of the government’s decision to impose retail closing times, saying the closure of commercial premises would have a detrimental effect on thousands of “poor and simple people” in Egypt.

The drafting of the constitution has been met with criticism from both liberals and conservatives, which have felt the constitution in its current state does not adequately reflect their desires.

The total votes held by the three candidates amounted to half of all the votes cast during the first round of presidential elections. During that time, many critics argued that the elections could have gone differently had the liberals united under a single candidate.