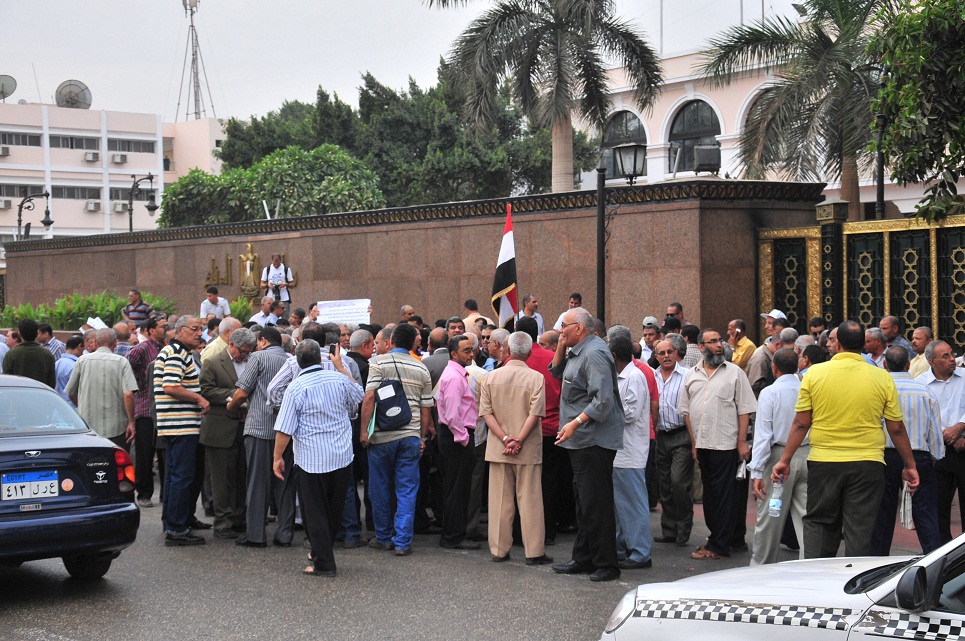 At the gates of the Ministry of Defence in Abbaseya, dozens of retired military personnel demonstrated for fair pensions and health insurance.

“I was injured in the 6 October war and I can’t pay for my treatment, my pension can’t even buy proper food for my family” said Alaa, a protester.

Essam Al-Sayed Mohamed, coordinator of the union of military retirees, said their number one demand was equal treatment with those who recently retired. “Those who retired in 2010 or 2011 get four times our pensions. They haven’t fought in any wars and they take our money,” said Mohamed, pointing out protesters had fought in the Gulf war, 1967 war, and 6 October war.

“If we hadn’t gone to those wars and sacrificed everything for the honour of serving our country, they wouldn’t have been born,” he said.

The protest was a silent, peaceful one; there were no chants and most of the protesters wouldn’t talk to the press, saying “it’s a military matter and we can’t disclose any information.” However, some of the protesters sought out the press as a way to pressure authorities.

“We’re military men; we know the meaning of discipline. We won’t block roads or chant, however we will not give up on our rights,” Alaa said while others applauded.

“The era of being silenced is over, yes we couldn’t demand our rights during Mubarak’s era, but after the revolution all we demand is proper treatment and recognition,” he added.

Another protester, Essam Salah, said, “we met with President Morsy before and after the presidential elections, he was very understanding and promised to take measures [to help us] within a month.”

Salah said after a month, Minister of Defence Abdel Fattah El-Sisi promised to form a committee to look into their demands. “They gave us one deadline after another and when we announced the protest, the president’s legal adviser, Mohamed Gadallah, met with us on Thursday and again promised to examine the demands.”

The demands include health insurance coverage of the retirees and their families, veterans’ cards, which offer privileges to their bearers, and the right to an apartment for military personnel.

“My military health insurance covers only my leg injury. I fought in the 6 October war and I have many injuries and heart problems, my pension is EGP 450, how am I supposed to treat the rest of my body?” said Mohamed, who passed his health insurance card around for all the protesters to see.

“These are our rights and not demands, the money is already part of the military budget and in our names, so instead of giving it to revolutionaries, give it to us. W don’t want a raise, just our dues” said Manal, a retired military nurse.

“We want a pension equal to those of the recently retired personnel… so either they add to ours or subtract from theirs,” Manal added.