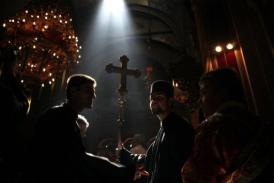 (AFP) – JERUSALEM — A dispute with an Israeli water company over unpaid bills has led to a Greek Orthodox threat to close Christianity’s holiest site, the Church of the Holy Sepulchre in Jerusalem.

Maariv newspaper reported on Friday that the Hagihon water company said it is was owed 9 million shekels ($2.1 million) in unpaid bills dating back decades.

In protest, the Greek Orthodox patriarchate, a joint custodian of the church, has threatened to close the Holy Sepulchre, said to be the site of Jesus’s crucifixion and resurrection.

Any such measure, however, would need the agreement of the Catholic and Armenian churches, which are co-custodians.

The Greek Orthodox Church contends that the Holy Sepulchre was always treated as a special case and exempted from water fees, unlike other churches in the Holy Land.

Its bank accounts have been blocked because of the dispute, according to Maariv, leaving the church unable to pay its priests or expenses, including electricity and telephone bills.

“Greek Orthodox Patriarch Theophilos III has spoken (to church officials) about taking measures… in protest at Israeli actions against the church,” said Dimitri Diliani, president of the National Christian Coalition in the Holy Land.

“He is consulting with the heads of churches to take the drastic measure of shutting down the Church of the Holy Sepulchre,” Diliani, a Greek Orthodox Palestinian, told AFP.

“It’s not a matter of money, it’s a change in the status quo that has protected the church for hundreds of years, it’s a way to pressure the churches and to introduce new Israeli-designed measures,” said Diliani.