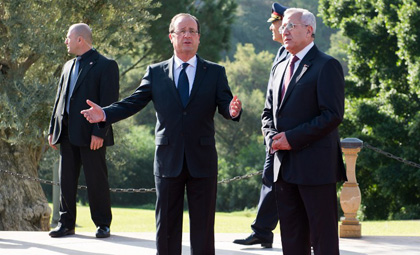 Beirut – French President Francois Hollande on a brief visit to Beirut Sunday pledged to “protect” Lebanon against threats of destabilisation caused by the deadly conflict in neighbouring Syria.

France is determined “to oppose with all its strength any bid to destabilise,” Lebanon, he added.

“Lebanon must be protected,” against any fallout from the conflict in Syria where more than 36,000 people have been killed since an uprising against the regime erupted in mid-March 2011, according to monitors.

Sleiman said at the news conference that he reaffirmed to Hollande “Lebanon’s commitment to avoid avoid the negative repercussions of the [Syrian] crisis.”

After his lightning visit to Beirut, the French leader flew to Saudi Arabia for talks with King Abdullah on Syria and Iran, before attending an Asia-Europe summit in Laos to talk trade at a time of economic crisis.

But security issues and politics topped the agenda of his talks with Sleiman in Beirut, at a time when Lebanon has been reeling from the effects of the deadly conflict that has shaken Syria since mid-March 2011.

The opposition accuses the government of complicity with the regime of embattled Syrian President Bashar Al-Assad, a former powerbroker in Lebanon which has also been accused of carrying out the 2005 assassination of ex-premier Rafiq Hariri – charges denied by Damascus.

Calls for Mikati to quit were spurred by a massive car bombing in central Beirut last month that killed top security official Wissam Al-Hassan, in an attack the opposition blamed on Syria and its allies in Lebanon.

Hollande said France was ready to help Lebanon probe the murder of Hassan, and said “there can be no impunity” for the assassination of Hariri and the security official.

The Beirut stop was a last-minute decision taken by Hollande to express France’s solidarity with Lebanon after the October 19 assassination of Hassan, the Internal Security Forces (ISF) intelligence chief.

The car bombing exacerbated tensions in Lebanon which has seen political and security spillovers from the 19-month conflict in neighbouring Syria.

There has been frequent shelling into Lebanese territory by the Syrian army as well as deadly clashes between supporters and opponents of the Damascus regime.

In August ex-information minister Michel Samaha, who has close ties to the Assad regime, was arrested over suspicion he was planning bomb attacks to provoke sectarian strife at Syria’s behest.

Hassan and the ISF played a key role in the investigation that led to Samaha’s arrest.

Western powers, echoing Sleiman’s concerns, have warned that Mikati’s departure could create a political vacuum in a country already rife with Syria-linked tensions.

Hours after the bombing Mikati said he was ready to quit but had accepted Sleiman’s request to stay on for the time being in the “national interest.”

And since the attack Sleiman has pressed for all-party talks on forming a new government “that can pull Lebanon out of its impasse” saying only then can Mikati resign.

France is willing to host a meeting of Lebanese political figures if all parties were represented and if Beirut made an official request for such a gathering, a government source said in Paris.

Hollande was to meet briefly later Sunday in the Red Sea city of Jeddah with King Abdullah of Saudi Arabia to discuss the implications of the Syria conflict on Lebanon and the region as well as Iran’s contested nuclear drive.

Iran is a backer of Hezbollah, whose militia is the most powerful force in Lebanon and has never disarmed after the 1975-1990 civil war.