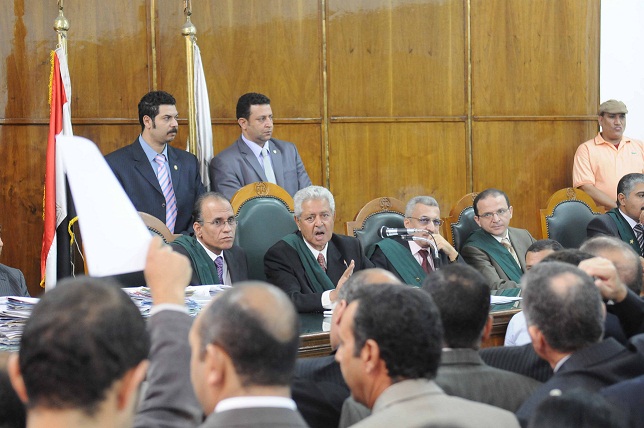 Independence of the judiciary has been on the agenda of civil society and activists since before the 25 January 2011 uprising that ousted former President Hosni Mubarak.

Judges under the Mubarak regime usually ruled in favour of the president, either through coercion or co-opting. Activists, and judges themselves, held several protests calling for an end to this.

Judges also play a prominent role in election monitoring, and were often forced to commit – or willingly ignored – electoral violations by Mubarak and his National Democratic Party.

Following the uprising, reforming the judiciary, as well as its independence, was added to the list of demands. The Constituent Assembly’s draft constitution achieves neither.

The section on the judiciary is marred by the absence of provisions to ensure its independence and an overreliance on the law to regulate most judicial manners. While most constitutions dedicate a large amount of articles to the judiciary, this draft does not even list the different courts.

Article 175 states that judicial authority is independent and held by “courts of different types and degrees” without mentioning any of these courts by name, such as the different primary courts like the criminal, misdemeanour, civil or family courts as well as the appeals courts and the Cassation Court.

The article also states that courts make their rulings as per the regulation of the law. It says nothing about judges having to rule fairly or implement justice. The basic principle of innocent until proven guilty is absent too. Interference in cases is a punishable offence by law, however.

The subsequent article states judges are independent, cannot be removed from office, cannot be assigned to duties other than those regulated in the law, and no one can dictate to them how to rule. Although this appears as a positive step, the article is empty rhetoric as it does not specify how any of these principles are to be enforced.

There are only two more articles on the general judiciary. Article 177 states that the law organises what judicial bodies are, what their specialisations are, how they are formed and how their members are hired.

This opens the door for legislators to cancel existing courts and judicial bodies such as the State Litigation Authority and the Administrative Prosecution as well determine how judges are appointed, potentially making the hiring of judges biased to the legislature of the executive.

Finally, Article 178 states that trial sessions have to be public unless the court decides to make them private, but that the verdict must be announced at a public trial.

The prosecution articles mention nothing about the appointment and removal from office of prosecutors, especially the prosecutor general, leaving all such matters again to the law, meaning that parliament will wield an unbalanced amount of power over the judiciary, both the courts and the prosecution.

Article 181 describes the State Council as an independent judicial body tasked with handling all administrative disputes and penalties. It does not explicitly state that the State Council handles cases brought against the government or other state powers such as the president, military or parliament although that is the council’s main function. Instead, the council’s “other duties” are to be determined through the law.

Finally, Articles 182 through to 185 conclude the judiciary section and describe the Supreme Constitutional Court. The court is an independent judicial body based in Cairo and it alone determines the constitutionality of laws and bylaws but cannot rule on the actual substantive cases.

This means that if a court refers a case to the Supreme Constitutional Court, the latter may only rule on whether the law or rule referred to it is constitutional, but does not get to interpret the results of its ruling on the actual case or produce a verdict.

The Constitutional Court is also tasked with solving jurisdiction disputes between different judicial bodies. Its members cannot be removed from office but the number of members and qualifications needed for membership are again left to the law.

Members of the court are to be “nominated” by the general assemblies of the Supreme Constitutional Court, the Cassation Court, the State Council and the Appeals Courts and the president ratifies the hiring decision. The actual process of hiring them is, again, left to the law.