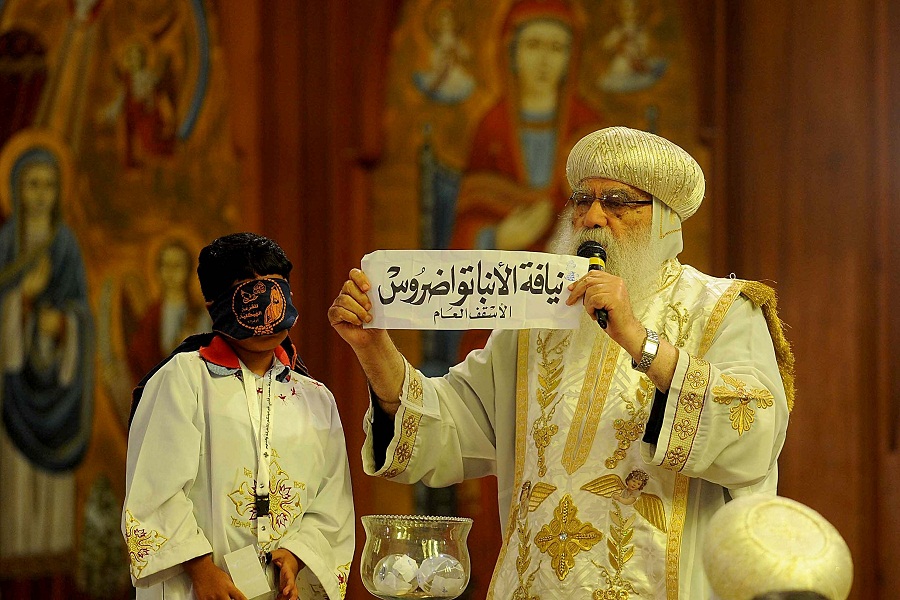 Bishop Tawadros of Beheira was selected as the church’s first new pope in 41 years on Sunday. The 60 year-old bishop received the second most votes in the election phase of the selection. He will be the 118th Pope of the Coptic church and play a vital role in the future of Egypt’s Christians.

Thousands filed into Saint Mark’s Cathedral in Abbaseya for the 8 am service. The church’s scouts coordinated most of the tight security presence. A pre-issued invitation or pass was required to enter the cathedral complex. Prominent Copts including presidential advisor, Samir Morcos, attended the service.

The three candidates, Bishop Raphael of Downtown Cairo, Bishop Tawadros of Beheira, and Father Raphael Ava Mina did not attend the liturgy, but each spent Sunday morning at their monasteries of origin.

At the beginning of the liturgy, acting head of the church, Metropolitan Pachomious of Beheira, read the relevant articles from the 1957 election law, which outlines current procedure for selecting a new pope. Pachomious then showed the congregation three lots bearing the names of the three final papal candidates, and folded each before placing them in transparent spherical containers.

All three lots were then placed in a clear vase with a lid tied down with ribbons and sealed with hot wax. Throughout the liturgy, a camera remained focused on the lots, in an effort to remain transparent and reassure they were not tampered with.

During his sermon, Pachomious stressed Christians must fast and pray before selecting their new leader. He said the next pope would set a spiritual example for the church’s members.

Following the conclusion of the liturgy, Pachomious randomly selected one of twelve boys to carry out the final selection.

Bishoy Guiguis Mosaad was chosen to draw the papal lot and blindfolded before doing so.

Bishop Tawadros spent his Sunday in the Western Desert at Saint Bishoy Monastery in Wadi Al-Natroun, where he started his career as a monk. Crowds at the monastery cheered for him and fellow clergymen are expected to visit him before he leaves the monastery.

This is the third time the current selection procedure has been used. It was first implemented to select Pope Cyril VI in 1959 and Pope Shenouda III in 1971. Copts see the random final selection as a way to allow God’s input and guidance in the church’s search for a new leader.

The general bishop of Beheira will be officially ordained and named Pope Tawadros II at Saint Mark’s Cathedral on 18 November, in a ceremony that is expected to be attended by high ranking government officials, including religious leaders, and, foreign dignitaries. Presidential spokesperson, Yasser Ali, said Morsy, if he receives an invitation, will study it and “see if he will attend.”

Pachomious will remain acting head of the church until the ordination.

Tawadros will become only the second pope to be enthroned at the current cathedral in Abbaseya.

According to the tradition of the Coptic church, its first patriarch was Saint Mark the Evangelist, who brought Christianity to Egypt and other parts of Africa. The selection comes almost eight months after the death of its 117th pope, Shenouda III, who carried out a 40-year papacy.

Bishop Tawadros was born Wagih Sobhy Bakky Suleiman on 4 November 1952 in Mansoura, and turned 60 on Sunday when he was selected to succeed Pope Shenouda III. After moving to Sohag, his family settled in Damanhour before he went on to study pharmacy at Alexandria University. He became a monk in 1988 and was ordained General Bishop of Beheira in 1997. During his tenure as bishop he developed a reputation for peace, attempting to find solutions to a number of issues, including sectarian problems.

He has stated he views the church as a spiritual entity that should not play a significant role in the political sphere, other than in extreme cases. He believes the church should play a pastoral, and service-oriented role.

In an interview with Bishop Paul of Tanta, Tawadros stressed the importance of reintegrating large segments of the Coptic youth back into mainstream society after many had isolated themselves within church communities.

Tawadros enjoys a close relationship with acting patriarch Metropolitan Pachomious and both oversee the same diocese of Beheira. Pachomious has drawn overwhelming approval during his tenure as locum tenens. Many think his relationship with Tawadros will have a positive lasting affect on the papacy, “He is a student of [Bishop] Pachomious,” said Emad Gad, a political analyst at Al-Ahram Center for Political and Strategic Studies and member of the Egyptian Social Democratic Party. “We think that he will be a wise man, he will be moderate, and he will try to work towards an Egyptian agenda. He will try to renew the role of the church and concentrate on the spiritual, not political aspects.”

Gad also acknowledged the critical timing of the papal selection in the context of Christian anxiety over their place in the country. “I think he will face many troubles like the Constituent Assembly, [kidnapping] of girls, and the issue of [religious] conversions, and building churches,” he said. “It depends on how [President Mohamed] Morsy will treat him. If he tries to approach it from an Islamic point of view, you can expect…clashes between the state and the church.”

Those who witnessed the selection marked it as a day of joy. “I think it means as it always does, that God provides the right servant at the right time,” said Bishop Angaelos, a UK-based general bishop and a member of the Holy Synod. “We’ve seen it since the days of Saint Mark himself, Saints Athanasius and Dioscorus, Pope Cyril VI and Pope Shenouda III. He continues to provide the right shepherd at the right time. It’s a joyous day for the church.”