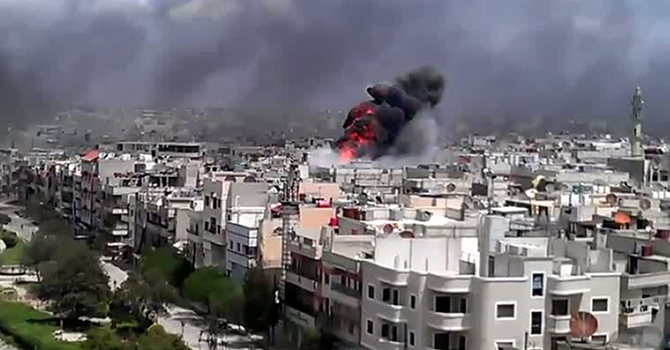 Damascus (AFP) – Fresh bombings and air strikes shook Syria on Tuesday, a day after nearly 250 people died in the country’s worst violence in weeks and rebels launched one of their deadliest attacks yet.

As the opposition met in Qatar under pressure to form a truly representative government-in-exile, the Syrian regime was reeling from a wave of rebel car bombs and attacks that killed nearly 100 soldiers and pro-government fighters on Monday.

Another car bomb struck early Tuesday, causing injuries and significant damage in the city of Mudamiya near the capital, the Syrian Observatory for Human Rights said.

Fighting and military shelling also hit the area, said the Britain-based Observatory, which relies on a countrywide network of activists and medics in civilian and military hospitals.

The regime also renewed a campaign of air strikes pounding rebel positions, with fighter jets dropping at least two bombs in the heart of the town of Douma, 13 kilometres northeast of the capital, the Observatory said.

Air raids also hit the northern town of Al-Bab near the Turkish border and in the central Homs province, it said.

The rebels have scored significant gains in recent weeks and hold swathes of territory in the north, but have come under intense bombardment from the air as President Bashar Al-Assad’s regime seeks to reverse its losses.

The Observatory said the army was shelling areas in the western Latakia region, in Homs and in Quneitra, near the Golan Heights, where the Israeli army said Monday that gunfire from the Syrian side had hit an Israeli military vehicle.

The Observatory said 247 people were killed on Monday, including 93 soldiers and pro-regime fighters, in the deadliest day in Syria since an attempt to impose a ceasefire for the 26-29 October Eid Al-Adha Muslim holiday collapsed.

In one of the most devastating attacks on Al-Assad’s forces since the start of the Syrian uprising, a rebel car bomb killed 50 pro-regime fighters at a military post in the central province of Hama on Monday.

Fighting was raging Tuesday in northern commercial hub Aleppo and around Damascus, where residents said heavy explosions could be frequently heard while warplanes and helicopters flew over the city.

A Syrian security source told AFP that regime forces had over the past two days repelled a major rebel attack on the capital.

“During the last 48 hours rebels carried out a massive offensive to move into Damascus, which failed…. They were repelled,” the source said, adding that about 4,000 opposition fighters had been involved on different fronts.

Pro-government daily Al-Watan also reported “heavy clashes between the Syrian army and armed bands” in Damascus over the previous 48 hours.

“More than 120 terrorists were killed by the Syrian army, without significant losses registered within its ranks,” the newspaper wrote, citing security sources.

Syrian state television said Tuesday that Mohammad Al-Laham, brother of parliament speaker Jihad al-Laham, was “assassinated by terrorists” in Damascus, but provided no other details.

In the Qatari capital Doha, members of the opposition Syrian National Council (SNC) were to hold talks Tuesday on a proposal to create a new political body to represent the opposition, folding in the SNC and other anti-regime groups.

After repeatedly expressing frustration with the SNC for failing to unite Syria’s fractured regime opponents, Washington is pushing for a new body that would be more reflective of the country’s diverse make-up and better represent on-the-ground activists and fighters.

In a bid to counteract such criticism, on Monday SNC members approved a restructuring that will see the organisation add 200 new members representing 13 different political groups.

The Observatory says more than 36,000 people have died since the uprising against Al-Assad’s rule broke out, first as a protest movement inspired by the Arab Spring and then as an armed rebellion.