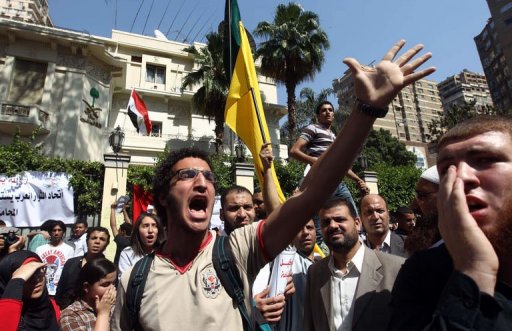 A non-governmental organisation has declared that the number of Egyptian political detainees in Saudi Arabia is over 1,000.

The Ministry of Foreign Affairs could not be reached for comment on the stated number of detainees.

Lately, numerous Egyptian civil society organisations have called on president Morsy and the Ministry of Foreign Affairs to push for the release of Egyptians detained in Saudi Arabia.

The Egyptian Association for Families of dDainees in Saudi Prisons issued a statement, holding president Morsy responsible for the continued detention of political detainees.

Ahmed Mefreh, Legal Coordinator of Al-Karama’s Egypt office, said that hundreds of Egyptian citizens in Saudi Arabia are unfairly detained for long periods. He added they are tried in unjust trials and subjected to torture and mistreatment.

Ahmed El-Gizawy, arrested in April 2012 and accused of trying to smuggle drugs into Saudi Arabia, and Najla Wafa, arrested in 2009 following a conflict with a Saudi princess, are among the most famous Egyptian detainees that raised the public awareness of the issue.

The arrest of El-Gizawy sparked outrage in Egypt, with protesters forcing the Saudi Arabian embassy to close briefly and Ambassador Ahmed Qattan temporarily leaving the country.

The Centre for Egyptian Legal Women’s Assistance released a statement calling for the office of the oresident and the foreign ministry to “intervene immediately” to form a legal committee to investigate Wafa’s conviction, and take judicial and political measures to release Wafa.

The report mentioned that Saudi Arabia is a signatory of the United Nations Convention against Torture.