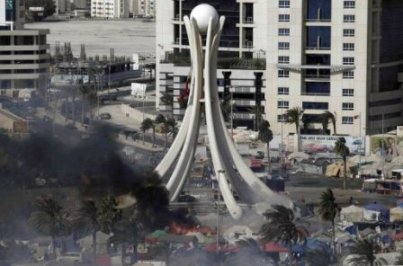 The names of the 31 activists, including brothers Jawad and Jalal Fairuz, both ex-MPs who represented the major Shi’a Al-Wefaq bloc, were listed in the report, which quoted an interior ministry statement.

Also named was Ali Mashaima, son of prominent activist Hassan Mashaima who is head of the radical Shi’a opposition movement Haq and who is serving a life sentence for allegedly plotting against the monarchy.

The government move comes after Bahrain late last month banned all protests and gatherings to ensure “security is maintained,” after clashes between Shi’a-led demonstrators and security forces in the Sunni-ruled country.

The Gulf state has experienced unrest since March last year when the authorities crushed protests led by the Shi’a Muslim majority.

According to the International Federation for Human Rights, 80 people have died in Bahrain since the violence erupted on February 14 last year.

Hundreds of people were arrested when the security forces, aided by troops from neighboring Saudi Arabia, crushed the uprising within a month, while many activists, including some whose names appear on Wednesday’s list, were tried in special military courts set up at the time.

Another former MP and leading Al-Wefaq member, Matar Matar, told AFP that “many named [on the list] were acquitted by a military court” after being charged with harming state security.

Others named on the list are currently living abroad, according to opposition sources.

Tension has been running high in the kingdom following a spate of bombings on Monday in the capital Manama which killed two Asian expatriates. Four people have been arrested in connection with the bombings.

King Hamad ordered Tuesday “the swift arrest of the terrorists who carried out the recent terrorist acts in Bahrain” and urged citizens to help “bring them to justice so they receive their punishment over this appalling act.”