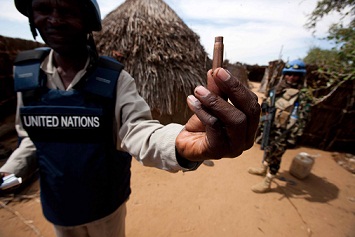 Khartoum (AFP) – Human Rights Watch (HRW) on Wednesday urged Sudanese authorities to grant peacekeepers quick access to a village where 13 civilians were killed, after the latest restrictions on movement of the Blue Helmets.

The deadly militia attack happened on Friday in Sigili village, about 30 kilometres southeast of the North Darfur state capital El-Fasher, a local source who cannot be identified for security reasons earlier told AFP.

SUNA, the state’s news agency, reported that 10 people were killed in a tribal clash.

The African Union-United Nations Mission in Darfur (UNAMID) said it tried to reach the area to gather information but government forces stopped the convoy.

“The UN security council should demand answers from the Sudanese government,” the watchdog’s Africa director Daniel Bekele said in a statement.

He said the government must hold an impartial investigation into the killings to bring “real justice, not a replay of past investigative committees that are formed and forgotten.”

The security council on 31 July expressed “deep concern at increased restrictions and bureaucratic impediments placed by the government of Sudan upon UNAMID movement and operations, particularly to areas of recent conflict.”

Darfur’s top official, Eltigani Seisi, agreed “there are some issues with access” but he told AFP in August that the government was trying to address them.

In the Hashaba area northwest of El-Fasher, more than 70 civilians died in September from rebel-government fighting and aerial bombardments, the United States said.

On 17 October, a UNAMID convoy on its way to the Hashaba area was ambushed by unidentified attackers, killing one South African UNAMID member and wounding three others.

UNAMID said the attack may have been designed to prevent its personnel from reaching the area to assess the situation.

Darfur, in Sudan’s far-west, is plagued by overlapping conflicts including rebel-government fighting, banditry, inter-Arab and tribal disputes, nine years after rebels in Darfur rose up against the Arab-dominated Khartoum government.