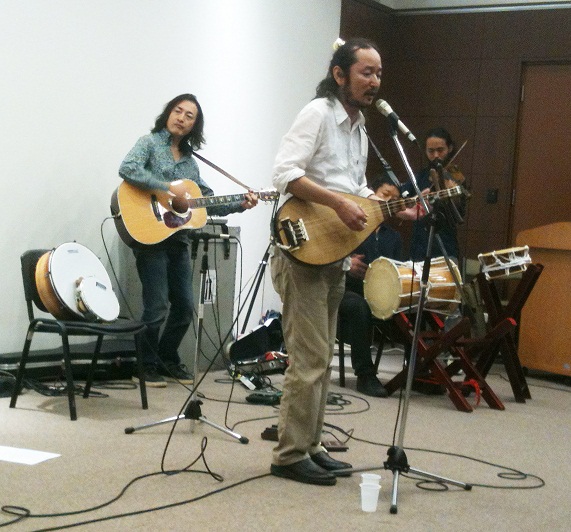 Last Tuesday the Japanese Embassy organised an event to welcome the visiting Japanese band Rock of Asia. The room was brightly lit and had only around 30 people when the event started, but over time the hall filled to over capacity with a young Egyptian and Japanese audience. After the official welcome speech, delivered in flawless Arabic by the Japanese ambassador, representatives of the JEN Youth, two girls and three boys, took to the stage and treated the audience to two songs.

The background music was provided by holding a microphone close to the speaker of a mobile phone and what the JEN Youth members lacked in singing ability they made up for with their enthusiasm. Singing to a home crowd they received their fare share of applause, especially for the solo Japanese song that was performed by one of the female members.

After a short introduction by the director of the culture centre, Hideaki Yamamoto, four members of the five-piece band Rock of Asia took to the stage. The leader and singer of the band, Nikki Matsumoto, immediately established a rapport with the audience by congratulating the JEN Youth for singing in Japanese and sharing that he had started learning English by singing songs.

Matsumoto explained he started Rock of Asia because he wanted to incorporate the use of traditional Japanese instruments in contemporary music, showing the audience his own instrument, the Biwa. The instrument has a similarity to the Oud, but has only four strings, of which two are the same, and the frets on the neck are widely spaced apart while the space between them is left open.

The band was missing one member, who got delayed in New York by the storm but should have reached Cairo by Wednesday, in time for the concert in Sakia. Besides the Biwa, the band features a guitar player, a violinist and a percussionist playing traditional Japanese drums.

The combination of the traditional and modern instruments worked flawlessly, the Biwa taking the role of what normally would have been the bass, and the diversity in the four songs that the band performed kept the audience riveted. Rock of Asia alternated between original compositions with English lyrics and traditional Japanese songs.

My personal favourite was an instrumental song written in 1901 that the band played as a tribute to the style of music at the time, as Matsumoto explained. Started by a hauntingly beautiful introduction played solo by the guitar, the violin added a lyrical melody as the Biwa provided accents and the drums an interesting counter-rhythm.

The concert concluded with the classic El Condor Pasa performed by all the musicians and had the audience singing and clapping along.

“This is our first visit to Egypt,” Matsumoto said, “and we are really looking forward to our performances here. We have of course followed everything that has happened here in the past two years and we are excited for the Egyptian people and of course support them.”

Matsumoto is very politically engaged and said his songs express this. “One of my major influences is John Lennon, and he was very vocal in his political beliefs. I think it is important to express ideas through music and I tend to be political in my lyrics as you can see by the song The Son, which was inspired by the book Son of Hamas by Mosab Hassan Yusef.”

When asked why he chose to play the Biwa, Matsumoto said, “there are only five to 10 people left in Japan that use the instrument as I do. The most common use of the Biwa is in the traditional story telling that dates back 700 years when the Biwa is used to give accents to the story. I felt it was a shame if such a long tradition would disappear and decided to change from playing guitar to Biwa.”

Rock of Asia will stay in Cairo for one week and will be performing in several different venues.