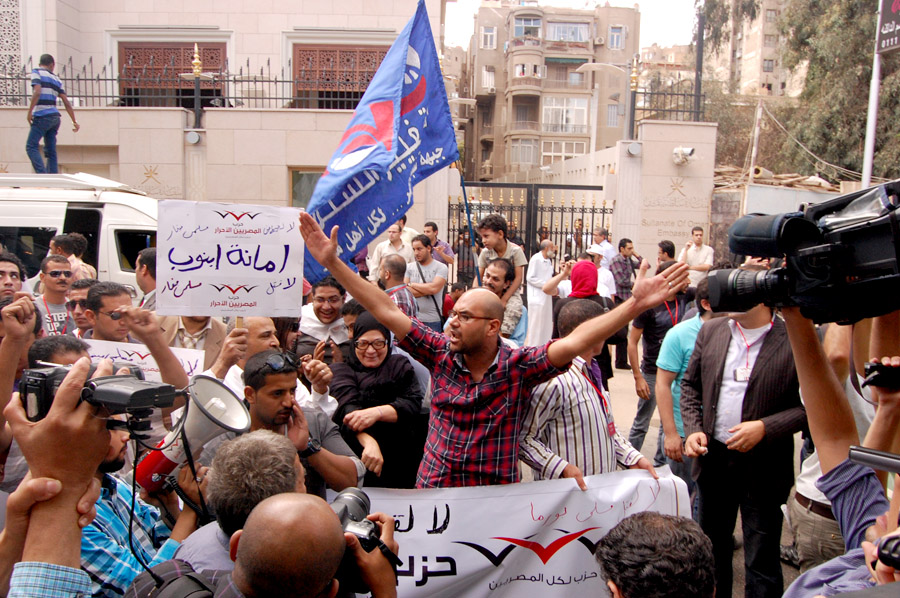 Around 100 members of the Free Egyptians Party (FEP) marched through Zamalek on Sunday to call for President Mohamed Morsy to take a stance on the violence against Muslims in Myanmar. The protest marched up Brazil Street towards the Embassy of Myanmar, only to be stopped by police 100 metres away from their target.

Mahmoud Alaley, the assistant of the party secretary said, “we are marching today because the government has failed to take a stance on the situation in Myanmar. We want to put pressure on the foreign ministry to appeal to the United Nations to take action.”

Hazem Helal, political marketing advisor for the youth committee, said “the Free Egyptians Party is against all violence against minorities around the world. Currently we are focusing our efforts on Myanmar, Syrian and Palestine.”

The crowd made their way peacefully down Brazil Street, allowing traffic to go by on one side of the march. The chanting was lead by members sanding on the back of a pickup truck. They called for action on Myanmar, freedom and justice and the fall of the Muslim Brotherhood.

As the approached the Myanmar embassy the police presence increased outnumbering the protestors.  A two man thick police cordon was set up blocking the path of the protestors. Helal said “Look how many police there are here for our peaceful march. We are about 100 metres from the embassy and they have stopped us. Tell me, is this right?”

The march was joined by 50 more FEP members at the police cordon. They hung their banner on the barriers the police had set up and continued chanting peacefully.

Conflict between Buddhists and Muslims in Myanmar claimed the lives of 90 people and made 30 000 homeless last month, and the same number of people were killed in June and 75 000 made homeless, according to AP.