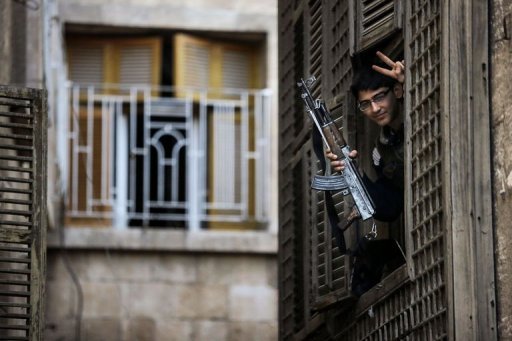 Damascus (AFP) – President Bashar Al-Assad denied Syria was in a state of civil war as the opposition met Friday for crucial unity talks and the main armed rebel group said it was undergoing a drastic reorganisation.

Underlining the mounting humanitarian crisis, Ankara said some 8,000 Syrians had fled to Turkey overnight after heavy clashes near the border, bringing to more than 120,000 the number of Syrian refugees in the country.

In an interview with Russian television, Assad warned that Syria was facing a protracted conflict because foreign powers were backing the rebels, but insisted there was no civil war.

If support for rebels from abroad stopped, Assad told state-run Russia Today (RT), “I can tell that in weeks we can finish everything.

“But as long as you have a continuous supply in terrorists, armaments, logistics and everything else, it is going to be a long-term war.”

Assad admitted divisions existed in the country, but said “division does not mean civil war”, said his future could be decided only through the ballot box and denied his forces had committed war crimes.

RT had on Thursday released excerpts of the interview in which Assad vowed to “live in Syria and die in Syria” and warned that foreign intervention in his country would have global consequences.

Assad’s comments came as his foes in the opposition met in the Qatari capital Doha for Western and Arab backed efforts to unite in a government-in-waiting representing the whole spectrum of regime opponents.

Participants in the talks said most delegates had agreed on a unified opposition structure that would allow coordinated military action, as well as humanitarian aid and the administration of zones under rebel control.

But exiled opposition umbrella group, the Syrian National Council, had yet to back the move, preferring to wait until it elected a new leadership later on Friday.

On the ground, the rebel Free Syrian Army (FSA) said it was reorganising and relocating its leadership to rebel-held territory in a bid to win vital international support.

General Mustafa Sheikh, who heads the FSA military council, told AFP in northern Syria that the group had started to restructure itself into five divisions, north, south, east and west, and the coast, and would elect new leaders.

“We are getting closer and closer to becoming organised, so that we can get to a stage that is accepted by the international community,” he said.

Sheikh said the FSA leadership, based largely in neighbouring Turkey, is countering criticism from its rank and file by relocating around 200 officers, including himself, back to “liberated” parts of Syria.

Clashes continued to shake the country, as activists prepared for traditional Friday protests against the regime.

At least 12 civilians were killed in shelling of a village in the eastern province of Deir Ezzor, the Syrian Observatory for Human Rights said, with a video released by activists showing bloodied corpses, including at least one of a child, lying in the middle of a road.

Warplanes were meanwhile flying over Damascus to bomb targets in rebel-held suburbs, an AFP correspondent said, and heavy explosions could be heard around the capital in the early morning.

On Thursday, 142 people were killed in violence across the country, including 56 civilians, said the Britain-based Observatory, which relies on a network of activists and medics on the ground.

Among the heaviest clashes on Thursday were battles for control of the mainly Kurdish northeastern town of Ras al-Ain on the Turkish border that killed 16 soldiers and 10 rebels, according to the Observatory.

A Turkish foreign ministry official told AFP that 8,000 refugees had fled to Turkey from the area overnight and that six Turkish civilians had been wounded by shots from across the border.

The Observatory says more than 37,000 people have died since the uprising against Assad erupted in March 2011, first as a protest movement and then an armed rebellion after the regime cracked down on demonstrations.