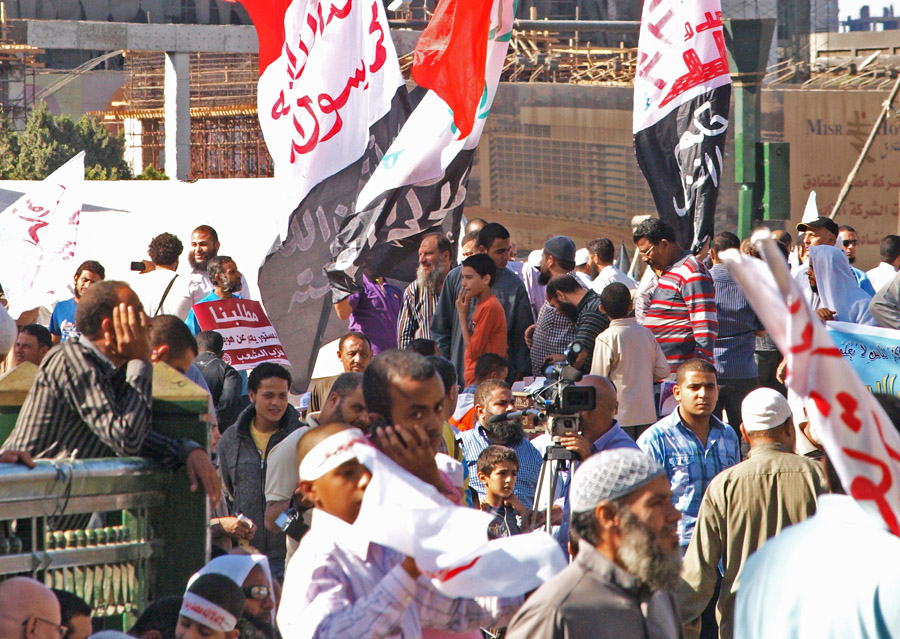 Thousands of protesters flooded Tahrir Square on Friday, calling for the implementation of Shari’a law. Demonstrators crowded around three main stages in the square, calling for Shari’a law to be the principle source of legislation in the country’s constitution.

“Our demand is very simple,” said Ahmed Ali, who said he did not identify with a specific political party or movement. “We want it to be the primary source in our constitution, not its principles. The principles alone aren’t enough. Everyone you see here is asking for this.”

“Having the principles of Shari’a included is the same as not having Shari’a at all,” said Mahmoud, a member of the Salafi Front. “Islamic law is the best option for all Egyptians,” he added. “It allows for Christians to use their own religious laws for personal matters like marriage and divorce.”

“We want to be ruled by our own religion, and nothing else,” he added.

Chants on Friday in the square included, “The people want the implementation of Shari’a law,” “The constitution is our constitution,” and “Islameya.”

Other chants were directed at secularists and liberals, calling them traitors for not accepting Islamic law.

Protesters also echoed chants calling on Mohamed Morsy to implementation of Shari’a law, saying it was his duty to do so as president.

In parts of the square, men formed human chains to provide female protesters with segregated zones.

Banners in the square called for the ousting of Prosecutor General Abdel Meguid Mahmoud, a constitution reflecting Egypt’s Islamic identity, the freeing of Omar Abdel Rahman.

Many held small red posters bearing the name of the Salafi People’s Party reading, “Our demand that the constitution expresses our identity.”

The demonstration was called for by a number of Islamist currents, including Jamaa Al-Islameyya and its political wing the Construction and Development Party.

Hafez Salama, a well-known veteran of the 1973 War, addressed supporters from a stage in Tahrir Square, saying that Shari’a law should be implemented, as it reflects the will of a majority of Egypt’s population.

The current draft constitution deems the “principles of Shari’a” as the primary source of legislation. Many Islamist factions objected to the use of term “principles,” arguing that it should be struck from the constitution and that Shari’a law should be more literally reflected throughout the draft.