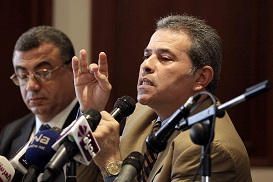 Egypt’s Administrative Court has postponed a lawsuit demanding that popular search engine, Google, be banned in Egypt. The court convened for its first session examining the lawsuit on Saturday, which was filed as a result of clips of the film the Innocence of Muslims‘ presence on Google-owned YouTube. The film created outrage across the Muslim world for its portrayal of the prophet Muhammad. The case will be reviewed on 12 January.

The Egyptian Association for Legal Development and the Horizon Society for Development filed the lawsuit, claiming that Google was responsible for a threat to social peace and complicit in the release of a film that offended Islam.

The lawsuit also demanded that Google issue an official apology to all Muslims and pay a compensation of EGP 2 billion in psychological damages caused as a result of the film.

The plaintiffs claimed the film offended more than one billion Muslims in Egypt and around the world. They asserted the company violated the terms of service that it was contractually obligated to uphold, reported MENA.

The Administrative Court also rejected a lawsuit filed by Tawfiq Okasha, the owner of Al-Fara’een, to resume the broadcast of his channel. Okasha submitted the lawsuit against the Minister of Information Salah Abdel-Masqoud and Minister of Investment Osama Saleh. The popular and controversial satellite channel was temporarily suspended in August following the television host’s insulting of President Mohamed Morsy and allegedly inciting violence against him. He was sentenced to four months in prison on Monday for related charges.

Okasha claimed Al-Fara’een should be authorised to return following temporary 45-day ban, which concluded on 23 September. He criticised Saturday’s decision as a violation of the freedom of expression and politically motivated by the Muslim Brotherhood, a group of whom he is known to be extremely critical.

Hafez Abu Saada, secretary general of the Egyptian Organisation for Human Rights, disapproved of the developments facing Google and Al-Fara’een.

“Any steps against Google are equal to banning the freedom of expression and exchange of information, and a clear violation of human rights,” he said. “YouTube is an important part of the mass media that most people use to express themselves,” he added.

The activist also disapproved of the decision to keep Al-Fara’een off the air. “I think freedom of expression means we have to welcome all television channels,” he said. “Al-Fara’een should come back…we have to support Okasha and his channel to come back to be part of the current dialogue in the country, because it is his right.”

Tawfiq Okasha was a presenter on the channel he owned and is notorious for his anti-Muslim Brotherhood views and support for members of ousted President Hosni Mubarak’s regime.