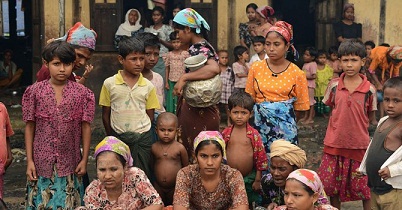 “The flare-up in Rakhine State represents a deeply disturbing backward step,” from Myanmar’s reforms after decades of junta rule, the Brussels-based rights group said in a report on the crisis due to be released on Monday.

“This is a time when political leaders must rise to the challenge of shaping public opinion rather than just following it. A failure to do so will be to the detriment of the country,” it added.

Urging the government to curb nationalist rhetoric from the ethnic Rakhine, who are Buddhists, the report warned of the threat of rising “identity politics” in Myanmar as reforms give new found freedoms to interest groups.

The volatile Rakhine situation needs “decisive moral leadership… by both President Thein Sein and Aung San Suu Kyi to prevent it spreading and contribute towards long-term solutions,” the study said.

Scores were killed and thousands of homes were torched in renewed violence last month and the ICG urged the government to ensure camps for the displaced do not become a precursor to the “segregation” of Rakhine and Rohingya.

The unrest pivots on the Rohingya’s lack of legal status in Myanmar, where they are seen by the government and many Burmese as illegal immigrants from neighbouring Bangladesh.

With around 800,000 stateless Rohingya in Rakhine, the reformist government is under international pressure to give them a legal status, with warnings that the conflict threatens its democratic transition.

In rare comments touching on the incendiary topic, Suu Kyi last week urged the government to be open in any discussions about the citizenship status of the minority.

But she has been widely criticised for failing to make her own position on the Rohingya clear, aware that many in Myanmar want the Muslim group to be sent to another country.

Suu Kyi’s reticence has the potential to undermine her position as a democracy figurehead and could also damage her National League for Democracy party, the ICG said.