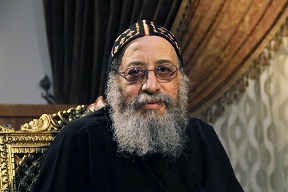 Bishop Tawadros of Beheira has expressed concern over the way in which Shari’a would be applied via the new constitution.

The Coptic church’s selected leader told Al-Arabiya that he hopes the second article of the current draft constitution, which states the principles of Shari’a are the primary source of legislation, remains unchanged.

His comments came amidst calls by Salafi parties to strike the term “principles” from the second article of the current draft.

He claimed that the church would reject a constitution that dealt differently with distinct segments of society or favours a majority.

Tawadros foresaw a church with a more reserved political role. “The pope doesn’t have time to work in politics,” he said. “His primary role is a spiritual one. The church is a spiritual establishment, only.”

Pope Shenouda III’s successor previously explained that an overtly religious constitution would be unacceptable in the eyes of the church.

Tawadros indicated that while he rejected the idea of the Coptic church as a political actor, that the revolution has provided Copts to take more active roles in the country’s affairs after decades of feeling marginalised and isolated.

Even before his selection, Tawadros acknowledged the need for Copts to become more politically active and cease to rely on the church to speak for them on matters beyond spiritual issues.

He was careful to not antagonise the rise of political Islamism, blaming insecurity felt by Copts on lawlessness, a post-revolution symptom that has also been felt by Muslim citizens.

Tawadros reiterated a ban on Copts travelling to Jerusalem, a policy that had been put in place under Shenouda III, claiming that the lifting of such a ban would betray the “Arab cause.”

Bishop Tawadros, 60, was selected as the 118th Pope of the Coptic Orthodox church on 4 November.He will be officially enthroned on 18 November and named Pope Tawadros II in a ceremony that will be attended by President Mohamed Morsy and other high ranking government officials and prominent foreign and domestic figures.

His papacy comes at a time when the country has experienced a rise in sectarian incidents targeting Christians. He will succeed the 40-year papacy of Pope Shenouda III and has indicated that his approach to politics will represent a departure from his successor’s, maintaining that the church will focus on its spiritual role.

The Muslim Brotherhood’s Freedom and Justice Party sent a delegation to the bishop at the Saint Bishoy Monastery in Wadi Natroun on Thursday to personally congratulate him for his selection and released a statement saying that Copts “are an essential part of the Egyptian people, and that they are partners in the homeland.”

Morsy signed a presidential decree on 7 November recognising Tawadros as the Coptic church’s new pope. Copts and activists have expressed disapproval of the wording of the statement released today, which declares that Morsy “appointed” the pope. Those who object to the wording of the statement claim that Morsy should simply ratify the appointment of Bishop Tawadros made within the church, and that the office of the president has no power over his appointment or dismissal.

Coptic lawyer and head of the Egyptian Federation for Human Rights Naguib Gabriel told state-owned Al-Ahram, “President Morsy committed the same legal error made by President Anwar Al-Sadat, when he decided to force out the late Pope Shenouda III in 1981.”

In September 1981, Sadat rescinded his presidential decree in an attempt to remove Pope Shenouda from his post, forcing the pontiff into exile at the Saint Bishoy Monastery. However the church insisted Sadat did not have authority to determine internal affairs of the church and maintained Shenouda as its head.

Gabriel said he would pursue legal steps to fix what he considered an “error” after consulting with the church.