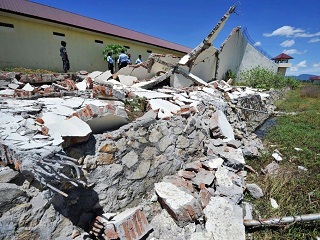 The shallow 6.8-magnitude quake struck in a rural area 116 kilometres north of Mandalay followed by a series of aftershocks, the US Geological Survey (USGS) said.

Another strong quake with a magnitude of 5.8 shook the same region late Sunday, it added. The tremor was felt by an AFP team near the town of Shwebo, which is north of Mandalay and close to the epicentre of the earlier quake.

There was no immediate information on whether the latest quake caused further deaths or major damage.

Four labourers flung into the Irrawaddy river from a partly-built bridge in the region were among those believed to have died, according to a situation report from the Save the Children charity.

The collapse of a monastery in the nearby village of Kyauk Myaung killed two people and one died in Mandalay, it said. A further six were killed in Sint Ku township, including two people who died when a gold mine collapsed.

“People everywhere are very worried that another earthquake might strike,” the aid organisation said.

Residents of Mandalay fled shaking buildings in terror, although no major damage was reported there.

“I ran from my bed carrying my daughter out to the street. There were many people in the road. Some were shouting and others felt dizzy,” Mandalay resident San Yu Kyaw told AFP by telephone.

An official from Myanmar’s Relief and Resettlement Department confirmed a death toll of seven so far, with four still considered missing from the bridge construction site.

He told AFP information was still patchy and the number of dead could rise.

Save the Children, which has an office in Mandalay, said reports indicated that 25 were injured in the bridge collapse on the Irrawaddy, with 10 taken to hospital.

It said 20 people were thought to have been taken to hospital in Shwebo and a further 10 were being treated in Mandalay.

Construction standards are generally poor in the country formerly known as Burma, one of Asia’s most impoverished nations.

A large crack stretching from the second to the sixth floor of Mandalay’s highest building, the 25-storey Mann Myanmar Plaza, appeared after the quake, a local resident told AFP.

He said people were afraid to enter the structure and it remains closed.

The USGS issued a yellow alert after the morning quake, saying “some casualties and damage are possible” but the impact should be relatively localised.

It was followed by two shallow 5.0-magnitude aftershocks within 20 minutes, according to the USGS.

“The quake was quite strong. I was shopping in the market at the time and I saw women crying in fear when they felt it. We expect more quakes are coming. Everybody is afraid,” said 23-year-old Win Win Nwe, a resident in Shwebo.

It comes little more than a week before US President Barack Obama is due in Myanmar on a historic visit, as the West begins to roll back sanctions to reward dramatic political reforms under President Thein Sein.

The quake was felt in neighbouring Thailand including in Bangkok.

Earthquakes are relatively common in Myanmar. The USGS said six strong earthquakes, of 7.0-magnitude and more, struck between 1930 and 1956 near the Sagaing Fault, which runs north to south through the centre of the country.

Kyaw Kyaw Lwin, an official at the National Earthquake Information Division in Naypyidaw, said it was the strongest quake in the area since a 6.0-magnitude quake in 1991.

More than 70 people were killed in March 2011 when a powerful 6.8-magnitude quake struck Myanmar near the borders with Thailand and Laos, reducing homes and government buildings to rubble and affecting thousands of people.

Aid workers praised Myanmar’s regime for its speedy response to that quake, in contrast to the handling of natural disasters by the previous junta which had ruled the country for decades.