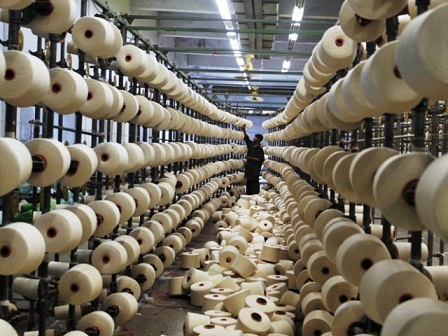 Around 3,000 workers are staging a sit-in in at Alexandria’s Bolvera spinning and weaving factory, while another 300 are at the house of the governor. They are demanding a return to state ownership for a factory they say is wracked with corrupt management.

Saturday is the 10th day of the strike. In addition to the sit-ins, workers have also blocked road blockages and started hunger strikes in an effort to increase exposure for their cause.

This Saturday was a big test for the strike as management threatened to again withhold monthly wages from the striking workers. After a four day delay, management gave in and pressure from workers led to payments on Saturday.

Another of the strikers’ demands is to reinstate workers who were fired in 2007. One of those workers is Said Shehata. He has a filed suit against the factory regarding his dismissal, but has been on the ground as part of the strike since day one.

“Currently the administration seems disinterested,” said Shehata. “They just want us to knock our heads against the walls.”

The demand of a return to state control is because of the corruption that has come from private ownership of parts of the company, Said Azzedine of the People’s Committee for the Defence of the Revolution in Alexandria said. “Pieces of the company are being sold at bedrock prices.”

This echoes a sentiment of the striking workers who are also demanding a halt to the selling process, which Shehata describes as “fraudulent”.

“ The company is trying to sell the assets cheaply, they could be selling for more.”

The strikers also demand the return of land sold to an investor, a bonus for spinning workers that was not given to those in Bolvera, and an investigation into the management’s squandering of funds. Lastly, the workers said they previously had a union and they now want it to be reinstated.

If the demands are not met?

“We will gather as many workers as we can, aiming for 5,000,” said Shehata. “We will take busses and we will go to Cairo, to the Presidential Palace. But of course we will do our best to work things out before then.”