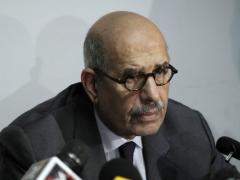 A member of the Al-Nour Party high board, Youssry Hamad, has criticised the chairman of the Dostour Party Mohamed ElBaradei for comments he made during a speech on Friday. Addressing his party, ElBaradei said they were “more Islamic than the clowns of religion who call people infidels and secularist as they please and act as if they have moral authority over us.”

Hamad responded by saying ElBaradei’s statements could be punishable by law, saying “some politicians forget in the midst of politics the principles, rules and protocols around appropriate language.”

ElBaradei had no respect for other ideologies and opinions, Hamad said. As an educated man “who has a doctorate in law, and worked in international institutions, [ElBaradei’s] use of obscenities, vulgar language and contempt for others in Aswan is punishable by law.” He further said that people are unsure what it is ElBaradei wants as his political stance is unclear.

Under Egyptian law, “if a person insults another person with no reason they must be punished,” according to Hamad. “The law does not allow for people to insult one another with no basis.”

Hamad said he was not looking to pursue legal action against ElBaradei, but wanted to make him aware that he could face legal action for attacks on people’s ideology and character. “I can discuss these things with you without resorting to an attack on your character,” Hamad said.

ElBaradei’s criticism was directed at Islamists who use terms such as ‘infidels’ when describing non-Muslims. Hamad said he does not agree with the use of the word infidel when describing others. “Everyone has the right to express their thoughts and ideology in a way that does not lead to personal attacks,” he said.

Al-Nour is a Salafi party which has been pushing for the amendment to the constitution regarding Shari’a law. Despite their desire to have Shari’a as the principle source of legislation, Al-Nour rejects protest as a means to achieve this. The 9 November Shari’a Friday protest drew thousands, but Al-Nour was absent.

“Protesting is not the way for us to achieve our goals,” Hamad said.