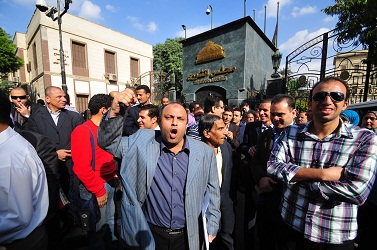 Dozens of protestors gathered in front of the Shura Council, the upper house of parliament, on Sunday to voice different grievances and demands.

The largest gathering was of judges from the State Litigation Authority, who were protesting changes to the section on the judiciary in the draft constitution.

Protestors said the drafting committee, headed by assembly chairman Hossam El-Gheriany, was trying to revoke the status of the State Litigation Authority, which handles cases against the government, as a full judicial body.

“There is pressure being exerted on the drafting committee with the goal of excluding us from the judicial institution,” said Ahmed Abdel Kabeer, a judge with the authority.

He added that the initial draft of the section on the judiciary – written by the system of governance committee – included them as a judicial body but that amendments introduced by the drafting committee stripped them of judicial standing.

“We demand the initial draft presented by the system of governance committee be implemented,” said Abdel Kabeer.

The judges held up a banner rejecting “the personal vendetta of the Constituent Assembly chairman against the State Litigation Authority.”

Journalists from the state-owned Al-Gomhuria newspaper and their supporters gathered in front of the Shura Council as well, protesting what they said was the council’s refusal to implement a judicial order restoring chief editor Gamal Abdel Rehim to his position.

Abdel Rehim was suspended from his position by the Shura Council and Supreme Council of Journalism head Ahmed Fahmy, after the paper published a news report that former Supreme Council of the Armed Forces Chairman Field Marshal Hussein Tantawi was banned from travel.

An administrative court ruled against Fahmy’s decision and ordered him to reinstate Abdel Rehim, which he is yet to do. The protestors were chanting against Fahmy and the rule of the Muslim Brotherhood, of which he is a member. Fahmy is related to President Mohamed Morsy by marriage.

“Oh enemies of freedom how many victims do you want?” and “Bread, freedom and proper journalism,” were the most prevalent chants. This is the second protest by Al-Gomhuria journalists in front of the Shura Council.

They said they would give the council three-days to implement the court order or else they would protest in front of the presidential palace in Heliopolis.

A group of protestors from Damietta demanded housing after being evicted as they could not pay rent following the 25 January 2011 Revolution.

“After our eviction we lived in tents on the street for a while but then we found empty apartments that belong to the urban development authority and we squatted in them. The military governor at the time visited us and expressed sympathy for our cause and granted us permission to stay there until the issue is resolved,” said Ibrahim Fouad.

Fouad added that they presented the presidency, transport ministry and prime minister’s office with reports on the situation but got no responses.

“We demand the formation of a committee from civil society, human rights organisations and the transport ministry to study similar situations instead of just accusing us of being thugs,” said Fouad.

“I call on President Morsy to stop the government from fighting the people and call on the Muslim Brotherhood to leave the Freedom and Justice Party alone. I call on the party to work for Egypt and not the Brotherhood.”