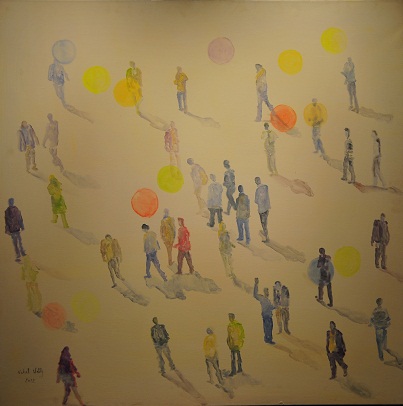 Egyptian artist Nihal Wahby’s first solo exhibition, titled I can walk but I have wings, I am meant to fly…, opened last Thursday night. The exhibition incorporates two series of paintings and two installations that gently encourage the spectators to engage in a dialogue with the works as well as the concepts the artists is exploring.

Walking around the exhibition the first work that draws your attention is the large, domed tower that is shaped like the traditional pigeon habitats of the Egyptian countryside. A projection of the galaxy and the sentence “We draw our own dreams” reflects of the tower and a rumbling sound that nearly reverberates in the spectator’s stomach automatically invites you to explore the installation. The installation called The Tower of Hopes and Dreams carries an invitation for the audience to write their personal hopes and dreams on pieces of paper and deposit them in the tower.

“This is the first time I exhibit an installation of this kind and this is directly related to the freedom I feel the revolution has brought me,” Nihal Wahby said. “I believe that it is possible now to fulfill our dreams and I want to remind people that it is important to do so.” Wahby believes that we live in the time of interactive art and she describes the hopes and dreams that have been added to the tower thus far are simple and could be made a reality.

“Reading the hopes and dreams is inspiring and they will lead me somewhere, be it a book, a movie or a website,” Wahby said. “I wanted to see how the tower would work in a protected art space first but I would love to take the tower all over the country, if not the world,” she added. “The installation works as a reminder for people to dream and I hope that once you have seen it you will be reminded to dream every time you see a similar tower somewhere.”

The second installation, The Trace, shows a collection of single feathers displayed on organic paper and captured in translucent frames. “The Trace is an ongoing project that started when I was given a feather by a friend.

It symbolised the freedom of flying to me and I started saving feathers wherever I found them. Friends started to bring me feathers and so the work became an interactive project,” Wahby said. “A wonderful thing happened when we were installing the piece; one of the people helping me gave me some new, beautiful feathers to add to the installation. It meant that the work reached them and that is really important to me.”

The paintings exhibited are separated in two series,I Want To Be Free and The Path. Both explore the themes of freedom and space and use square canvasses which “allow me freedom; when I work on a square canvas I feel I have no boundaries,” Wahby said.

The series I Want To Be Free feature doves and pigeons and was painted before the revolution. “The colours and birds are chosen because they represent freedom and space but they have a dreamlike quality. At this time freedom was still a dream and I had planned to exhibit the series accompanied by a beautiful cage,” Wahby said.

The Path also explores space and features multiple, anonymous figures. “I want to paint what is currently happening around me. We are all asking ourselves what we want and where our place is now our situation has changed since the revolution. I used translucent colours in multiple layers and compositions that reflect how we search to define our place within a group as individuals,” Wahby explained.

Wahby’s work is subtle and engaging, something that is important to her. “I do not want art to be divisive and it is not about me, I want to create a dialogue between me, my work and the spectator.”

I can walk but I have wings, I am meant to fly… will run until 29 November in the Hanager Gallery in the Opera Grounds.