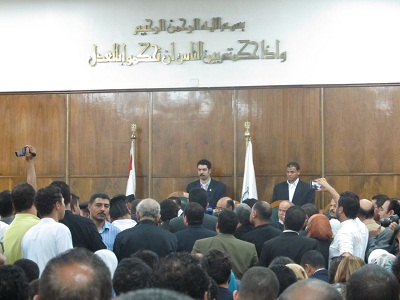 The administrative court postponed the final verdict on Nile University case to 18 November as students entered their 76 day of a sit-in.

Nile University students have been on protest since early September, after the government’s decision to appropriate university buildings to hand them over to the Zuweil City for Science and Technology.

The university’s staff, students and their parents gathered at the courtroom waiting for the verdict that was due on Sunday; the court’s decision came as a surprise to the students. It was announced by Counsellor Karem Abdel Latif.

“Nobody was there from Zuweil’s side, apparently they knew it would be postponed” said Ahmed Nassar, head of Nile University’s student union.

He added that they were shocked by the verdict, “the judge didn’t even give reasons for the postponement.”

Nassar said that, according to their lawyers, the verdict can’t be postponed after 18 November.

“The verdict has three scenarios” Nassar explained saying that if the court ruled in their favour they would enter the university buildings directly; if the verdict was to annul the government’s decision, then the students would wait for a permission to enter.

“The worst scenario would be for Zuweil to win the case; then we would continue taking our classes outside the campus” Nassar said.

Since the start of the academic year, students have been attending their classes in the greenery outside the campus.

“This postponement is unexplained, all our papers are complete and right” said Omar Rezq, a student at the school of business/entrepreneurship at Nile university.

Rezq explained that the case has been in court for two years; it was postponed many times, but this was the first time a “verdict” was postponed. He added their lawyers couldn’t figure out a reason for this decision.

“We have a feeling there is something going on behind the scenes” Rezq added.

A cabinet committee formed by Prime Minister Hesham Qandil offered a solution where Nile University could use the buildings of the Educational City in 6th of October city, whereas Zuweil City would be allowed to use the disputed Nile University buildings for one year.

The students rejected the solution that denied them access to specialised laboratories at Nile University needed for their studies.

Zuweil appeared on state TV later in September. He said the government assigned him empty buildings, which were to go on to become the Nile University campus, 10 years ago. He said after Nile University discovered their legal papers were not credible they gave the campus up.

His plans for Zuweil City were in progress when the conflict started. He added that the administration turned down his offers to resolve the situation that included having the students remain on campus.