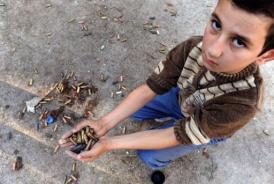 Doha  — The Syrian opposition struck a hard-won deal on Sunday on a new structure to take forward the 20-month uprising as clashes on the Golan Heights prompted what was reported to be the first Israeli fire across the armistice line since the 1973 Middle East War.

Participants in marathon talks in Qatar said discussions were continuing on details of a planned new government-in-waiting but that the Syrian National Council had now heeded Arab and Western calls to join a new, wider coalition.

The Israeli warning shots across the UN-monitored ceasefire line between Syria and the occupied Golan Heights came after a mortar round fired from the Syrian side hit an Israeli position and after Prime Minister Benjamin Netanyahu told his cabinet Israel was “ready for any development.”

Reservations in the ranks of the SNC about what many members saw as a move to sideline it had prompted repeated delays in the Doha talks and mounting frustration among other dissident groups as well as the opposition’s Arab and Western supporters.

But after negotiations that ran into the early hours of Sunday and resumed in the afternoon, opposition officials said a deal had finally been done.

Another delegate to the protracted talks, Ziyad Abu Hamdan, said: “There is no longer any disagreement,” about the new opposition structure.

He said agreement had also been reached on unifying the multiple military councils in command of rebel fighters inside Syria and the talks were now focussed on the details of the planned government in waiting.

The talks’ Qatari hosts, along with neighbouring Saudi Arabia, have been key backers of the Syrian opposition and both stand accused by Assad’s government of funnelling arms to the rebels through Turkey.

There had been mounting diplomatic pressure on the opposition to overhaul its structures amid US-led accusations that the SNC had lost touch with civilian activists and rebel fighters inside Syria and become little more than a talking shop for exiles.

International concern had been further raised by fears of a spillover of the conflict as fighting raged on Syria’s borders with Iraq and Turkey as well as on the armistice line with the Israeli-occupied Golan.

The Israeli army said that a mortar round fired from the Syrian side had hit one of its positions on the Golan prompting the riposte from its troops.

“A short while ago, a mortar shell hit an IDF [Israel Defence Forces] post in the Golan Heights adjacent to the Israel-Syria border, as part of the internal conflict inside Syria,” the army said in a statement.

Military sources told AFP that the army used a single Tamuz anti-tank missile, a weapon known for being highly accurate.

In addition, the army said in its statement it had filed a complaint through the local UN forces, warning that “fire emanating from Syria into Israel will not be tolerated and shall be responded to with severity.”

It was the latest in a string of incidents on the armistice line between Syria and the occupied Golan, which Israel seized in the 1967 Middle East war and annexed in 1981 in a move never recognised by the international community.

The latest fire came after the Israeli premier told the weekly cabinet meeting that the army stood ready to act.

“We are closely monitoring what is happening on our border with Syria and there too we are ready for any development,” Netanyahu said.

On Thursday, three stray mortar rounds from Syria hit the Golan, prompting deputy prime minister Moshe Yaalon to warn Damascus that Israel would act to defend its sovereignty if fighting continued to spill over.

Israeli media said the warning shots across the UN-monitored demarcation line were the first since the armistice that ended the 1973 Middle East war.

Fighting also flared on the Turkish border as Syrian troops and rebels battled for the town of Ras Al-Ain, where thousands of refugees have fled into Turkey in recent days, the Syrian Observatory for Human Right said.

Ras Al-Ain is one of just two Turkish border crossings still controlled by the Syrian army. Rebels fighting to bring down Assad have captured four others while a seventh is controlled by Kurdish militia.

Violence also broke out on the Iraqi border, with government warplanes bombing rebel positions in the frontier town of Albu Kamal, scene of persistent fighting for several months.

At least two civilians were killed in the town, said the Observatory, which relies for its casualty tolls on a network of activists, lawyers and medics in civilian and military hospitals.

On Saturday, 121 people were killed in violence, the Observatory said, among more than 37,000 who have lost their lives since the uprising against Assad’s rule erupted in March last year.