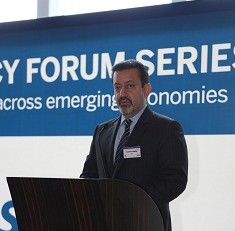 Financial literacy is fundamental in empowering people to take charge of their financial futures. Money matters impact on almost every sphere of a person’s life, and financial literacy gives individuals the power to take more control of their lives.

Visa Inc.’s Financial Literacy initiative was created in 1995 and has grown into a robust, multi-faceted programme used by parents, teachers, students and consumers of all ages around the globe. A key principle of Visa’s programme is to consistently develop innovative channels and tools to help people effectively learn the fundamentals of personal finance.

The Financial Literacy initiatives are a part of Visa’s CSR strategy and provide information as well as tools to individuals in order to help them make financially savvy and well-informed decisions about managing personal finances.

In the US, Visa’s Financial Literacy programmes are implemented into school curriculums and with the help of leading consumer advocates, educators, and financial institutions they have developed the Practical Money Skills programme. Visa also works with state and national governments to co-sponsor community-based events such as statewide Financial Football rollouts and the annual Financial Literacy and Education Summit, which is held in Chicago every April.

In Egypt a few of the most recent initiatives include the creation of a My Money Skills booklet in both Arabic and English which explains basic money management and was distributed at banks throughout 2010 and 2011. An online banner campaign took place during the summer of 2010, where a few local banks placed a banner on their websites, which connected customers to Financial Football, an interactive game on the My Money Skills Middle East site (www.ehsib.com). The most recent Financial Literacy tool Visa has created is a Marvel comic book, created specifically for Visa’s Financial Literacy campaign as a fun way to teach youth about money management, which has also been translated into Arabic.

The volatile economic environment and its impact on the most vulnerable communities have underlined the increasingly important role of financial literacy as a key skill that can help assure personal financial security, wealth-building, and financial inclusion for those still outside the banking system. Financial education can be the difference between surviving and thriving.

The 2012 Global Financial Literacy Barometer, released by Visa and Kiplinger’s Personal Finance Magazine, recently assessed and ranked the financial literacy levels of 25,500 participants in 28 nations. Brazil topped the list as having the most financially literate population, followed by Mexico, Australia, the United States and Canada. Egypt was right in the middle, coming in at number 14. According to the survey, the countries with the least financially literate populations were Pakistan, Indonesia and Vietnam.

While Egypt fared better than half of the nations surveyed, there is still plenty of room for progress. Egypt ranked eighth in terms of households that abide by a monthly spending budget with 48 per cent of respondents claiming they adhere to such a budget. Egyptians placed fifth when asked if they believe financial literacy should be taught in schools. In terms of perceptions about young people’s understanding of money management and their preparedness to spend responsibly, Egypt ranked in the middle of the group at 15. On the whole, Egypt came in 10th for the amount of times parents talk to their children about money management issues, but was ranked third among countries surveyed in the Middle East and North Africa (MENA) region.

“These survey results demonstrate a great opportunity for Visa and other financial literacy market players to enhance our efforts in raising awareness about the importance of responsible money management,” said Tarek Elhousseiny, general manager for Visa Egypt, North and Francophone Africa. “Financially literate populations positively impact the economies in which they live and by taking part in financial literacy education, we are working towards a more empowered and informed Egyptian citizenry.”

Overall, the survey found that parents from the most economically-stressed situations are among those spending the most time talking with their children about money management, budgeting, saving, responsible spending and debt. Egypt received its lowest ranking (23rd) in terms of having savings set aside in the case of an emergency, with only 20 per cent claiming to have at least three months worth.

But what is the best way to provide this form of education, taking into consideration the different cultural and market development needs? Which channels are most productive and what policies should regulators put in place to support financial literacy initiatives? What types of partnerships are needed between the public sector, private financial institutions, academia and civil society to ensure that financial education programmes achieve their desired outcome? How are programmes customised for different financial levels, age groups, life cycles and specific financial challenges?

To answer the above questions, Visa and the Financial Times have partnered in holding a high level series of forums to gather policy-makers, educators, financial service providers and other experts and thought leaders to discuss how to optimise the provision of financial education in different emerging economies, the basic foundations that have to be in place, and the regional characteristics that need to be addressed, both in terms of programme development and the channels used to maximise reach and impact.

“We are pleased to meet today with policy makers, tutors, financial services providers and opinion leaders Visa recognises. Our gathering is an indication of the necessity of Financial Literacy and the important accomplishments we succeeded to fulfil so far. Financial Literacy is currently toping the agenda of the G-20 meetings, 35 countries worldwide has set national strategies to combat financial illiteracy among its citizens,” said Kamran Siddiqi, general manager Visa MENA. “Visa has a decade-long commitment to promoting financial literacy worldwide and has pledged to empower twenty million people with financial literacy skills by 1 May 2013, which it recently accomplished nearly one year ahead of schedule.”