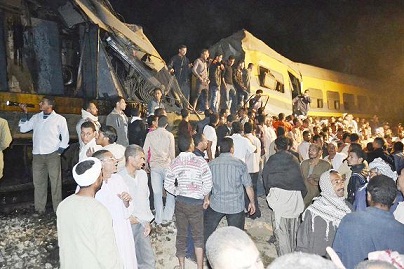 The minister of transportation may resign over a recent deadly Fayoum train crash.

Mohamed Rashad Al-Mateeny told the independent newspaper, Tahrir, that if investigations prove the deadly head on train collision in Fayoum was caused by negligence, whether in labour or equipment, then he will consider himself responsible and resign.

He added the decision to resign is a personal one and he hadn’t discussed it with Prime Minister Hisham Qandil yet.

Mahmoud Abdel-Meguid, head of the operations room in the governorate of Fayoum, said that the investigations into Saturday’s incident have already started.  A technical committee formed by the National Railways Authority (NRA) will investigate the incident.

The train crash left three people dead and 43 injured. “Only four people remain hospitalised and are in stable conditions. The rest have been discharged,” he added.

The head of the NRA, Mostafa Qenawy, told the Turkish news agency, Anadolu, that the railways authority has a debt of EGP 1.1 billion because of concessions it makes to university and school students as well as private and public sector employees.

He also said that the NRA is not raising the ticket prices despite the rising costs on instructions from the government.

According to state-run Al-Ahram, the revenue made by the NRA for the year 2011-2012 was EGP 2 billion while the expenses were EGP 3.5 billion, 1.1 billion were spent on concessions for passengers such as school students.