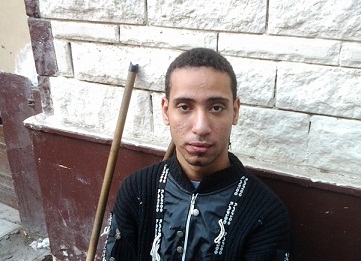 Several people wounded during the 25 January Revolution attempted suicide on Sunday, after not receiving their promised welfare packages.

Abdallah Sayed Ahmed, injured during the cabinet clashes, attempted suicide by drinking a whole detergent bottle while Ahmed Elsayed Ibrahim, injured in the eye during the Friday of Anger (28 January), set himself on fire before he was rescued by other demonstrators. Both said they attempted suicide after losing hope of getting their rights.

Ahmed said two of the demonstrators met President Mohamed Morsy on Sunday, when he said he knew nothing about their sit-in or demands. He added that other demonstrators met Mohamed Fouad Gadallah, the president’s legal advisor, who treated them harshly, saying that he will not do anything for them.

This comes as dozens of people wounded during the revolution entered the eighth day of their sit in on Monday, inside the premises of the National Council for the Welfare of the Injured and the Families of Martyrs. Some entered their third day of hunger strike.

The demonstrators are holding the sit-in inside the council, preventing its employees from doing their jobs.

Magdy Ahmed, also injured in the eye during the Friday of Anger, said the council did nothing for the families of the injured and the dead. He asserted that lots of them were treated harshly by the employees.

Ahmed said he received EGP 20,000 after he was injured. He said that the EGP 20,000 is some sort of a subsidy given to the wounded, but not an indemnity. He added that the government promised the wounded an indemnity of EGP 50,000 in addition to an apartment and a job in a governmental institution, which he has not received.

Khaled Badawi, secretary general of the council, could not be reached for comment on the demonstrator’s claims.

“I want to deliver a message to Sheikh Morsy, you said you would quit if you can’t fulfil the demands of the people. You said you would take care of the martyrs’ and injured. This is not a welfare council; it is a torture council. Leave your position and go back to the mosque,” said Ahmed.

Several demonstrators are on a hunger strike while others are staying in a room inside the council, refraining from eating, drinking, or talking to anybody.

After several attempts, Daily News Egypt was allowed to enter the room, where the six demonstrators gave brief statements asserting their readiness to continue their hunger strike.

“We were injured trying to protect the rights’ of others, but others are not willing to help us. We will only leave this room when we receive our dues or when we are dead,” said one.

Sherif El-Masry, injured during the Friday of Anger, said they are holding the sit-in to achieve their legitimate demands, which include punishing those who injured them and killed others, compensation, and to be allowed to work by being excused from military service.

El-Masry said several demonstrators did not submit their documents to the military before they were wounded, and now that some of them have received jobs in governmental positions, they are not allowed to start work because they have not completed their military service.

“It is wrong to try to avoid military service, but when you have a family to feed, you are obliged to do that,” explained El-Masry.