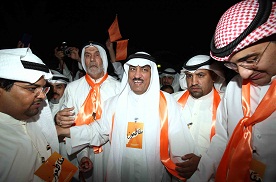 The request came during the first hearing in Barrak’s trial where he faces charges of making public remarks deemed offensive to the Gulf state’s ruler, who under Kuwaiti law cannot be criticized.

“It was a procedural hearing. We requested a delay to read the case documents and the court set the next session for 10 December,” Jadaei told AFP.

He said the defence team would submit medical reports on Barrak’s health within two days and that they expected a quick response.

Barrak was arrested on 29 October and remanded to 10 days in custody, sparking violent demonstrations in which more than 30 protesters and several policemen were injured.

Jadaei said Barrak was charged with insulting the emir and undermining his status. He faces a jail sentence of up to five years if convicted.

Three other former opposition MPs — Falah Al-Sawwagh, Khaled Al-Tahus and Bader Al-Dahum — are to appear in court on Tuesday on similar charges. They were detained for five days last month before being freed on bail of $17,800.

A fifth former lawmaker is to appear in court on 26 November while a sixth ex-MP is facing similar charges but no date has been set for his trial.

Kuwait’s Islamist, nationalist and liberal opposition has been staging protests against a decision by the emir to amend the electoral law.

The opposition claims that the change is not legal and is aimed at electing a rubber stamp parliament when voters go to polls on 1 December.

Three major protests in the past three weeks have turned violent but a massive rally on Sunday passed peacefully. The opposition has said it will continue protesting until the law is repealed.