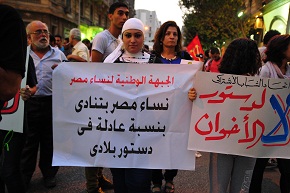 Around 220 NGOs have joined forces in the “Civil Par Excellence” campaign, which rejects the constitution and calls for the removal of restrictions on civil society.

When it was launched, the campaign had the support of 205 NGOs but Hagag Nayel, one of the coordinators of the campaign said on Monday, “I’ve just received signatures of 15 more organisations.”

The campaign wants the regime to declare Egypt as a civil state, accommodating all cultures, religions, and races. They think the concept of citizenship should be the basis for obtaining rights and freedoms in the constitution. Nayel said the issue with the constitution is much larger than the use of the word Shari’a (Islamic law), the constitution is not representative of the people.

“The constitution doesn’t represent society with all its classes and segments… It differentiates between people based on ethnicity and religion,” Nayel said. He described the constitution as a “sectarian constitution.”

“It differentiates between the rich and the poor and infringes on the freedom of the judiciary, the press, the parties, unions and the civil society,” he added.

“The only people who are pleased with the constitution are the ones who have put it together,” he said. Nayel doesn’t feel that the people writing the constitution are the most qualified for the job. “They were appointed based on percentages…rather than qualifications and competencies… For example they said, the Muslim Brotherhood will get 20 seats, the Salafis 10 and the liberals three.”

“The constitution has no mention of the word ‘human rights’ or Egypt’s commitment to human rights treaties,” he added.

The campaign asks that the Constituent Assembly stop work until its fate is decided by the Supreme Constitutional Court, as a sign of respect to the law.

The campaign also called on the regime and the ruling party to stop their “policies of control and domination.” It wants restructuring of the Ministry of Interior. It demanded the drafting of laws, which govern the right of society and the freedoms of the citizen without one coming at the expense of the other.

The campaign also calls for a law to govern civil society, which is based on international treaties and civil law.

APHRA is responsible for gathering signatures of NGOs who would like to be a part of the campaign.

If the constitution is passed in its current form, the campaign pledges to urge people to vote “no” to the constitution, which will be put up for referendum after the CA is done drafting it.