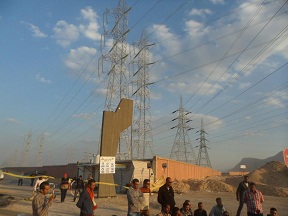 The director of Suez security ordered a group of policemen to reopen the construction site of the Ain Sokhna power plant at 7am on Tuesday morning after striking workers closed the site for three days.

Major General Adel Raffat, director of Suez security, announced that he sent police to reopen the power plant, led by Major General Hassan Eid, assistant director of security for the site. The security forces arrived at the plant at 7am and faced no resistance from the striking workers, he said.

Raffat said, “the demands of workers must not interfere with the workflow within the production sites, especially one like the Ain Sokhna power plant, which is in a race against time to be completed.” He added, “the establishment of the plant will be a pillar of Egypt and the Arab world as a whole.”

The striking workers have left their picket line outside the site to discuss what action they will take next.

A meeting was held on Monday between the minister of electricity and energy, Mahmoud Balbaa, and representatives of the striking workers. Balbaa said after the meeting that he will look at the matter and added that the workers had no right to close the site.

Raffat stressed that an urgent memo, outlining the workers demands, was sent on Tuesday to the construction companies involved in project, the Governor of Suez Samir Ajlan, and Balbaa. The demands will be discussed in order to resolve the strike.