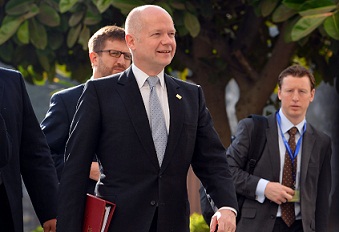 Foreign ministers from the European Union (EU) and Arab states met on Tuesday at the headquarters of the Arab League in Cairo. The British and French foreign ministers welcomed the National Coalition for Syrian Revolutionary and Opposition Forces, which called for world powers to arm the opposition in Syria.

The recently formed national coalition looks to unify the fractured Syrian opposition movement. It is hoped to act as a conduit for funding to opposition on the ground.

In his speech at the meeting, British Foreign Secretary William Hague welcomed the formation of the opposition coalition saying it “gives the opportunity for a united, inclusive and credible political alternative to the Assad regime.” He also announced that Britain “will increase [its] support to Syrian opposition groups.”

French Minister of Foreign Affairs Laurent Fabius also welcomed the formation of the coalition, after a meeting on Tuesday with its president, Ahmed Moaz Al-Khatib.

In an interview with AFP on Tuesday, Al-Khatib said that the opposition need weapons to “cut short the suffering of the Syrian people.” He pointed out that the opposition are not sufficiently armed to deal with “bombardment from Bashar (Al-Assad)’s warplanes” saying that they need “specialised weapons.”

Hague thanked the joint United Nations and Arab League special envoy to Syria, Lakhdar Brahimi, for his efforts to solve the Syria crisis. Hague said Britain supports Brahimi’s effort to push a UN Security Council resolution on Syria but pointed out that “there is no indication that the outcome now would be different,” in reference to Russia and China using their veto to block past resolutions.

The British foreign minister also stressed the need for increased aid to Syria because winter is coming.

In a separate meeting on Monday evening, foreign ministers of the Arab League agreed the national coalition is the “legitimate representative of the aspirations of the Syrian people.” This differs to a statement released by the Gulf Cooperation Council, which said that it recognises the opposition coalition as “the legitimate representatives of the Syrian people.” Algeria and Lebanon both expressed reservations on the decisions made regarding Syria.

Aside from condemning the violence by government and opposition forces, they called on the UNSC to punish Syrian forces and government loyal militants for what they consider to be “crimes and massacres.”

Attacks on Syrian and foreign journalists by Syrian security forces were also condemned and it was highlighted that this is “contrary to the laws and regulations concerning the protection of journalists in conflict.” The decision added that these attacks are “a breach of the obligations of the Syrian government.”

The group also expressed concern over the worsening humanitarian situation in Syria and the resultant consequences being “the displacement of more than two and a half million of the population inside Syria and the migration of hundreds of thousands to neighbouring countries to escape the violence and genocide.” The states that have hosted the people fleeing the violence were commended and it was agreed that support should be provided for those countries.”

In addition to discussions on Syria, the group of foreign ministers also discussed the issue of Palestine’s bid for non-member UN status, the Israeli bombing of a factory in Khartoum, and preparations for the 2012 conference on the establishment of a nuclear weapons and weapons of mass destruction free zone in the ME.